The English Department Reflects on the Work of Walter Wangerin, Jr.

On August 5, 2021, the Valpo English Department lost one of its most celebrated faculty members, Walter Wangerin, Jr., Senior Research Professor and former Jochum Professor of English and Theology. As we grieve the loss of our remarkable colleague, we also celebrate his legacy as a teacher, pastor, published writer, and storyteller. In this spirit, we announce two tributes to Wangerin featuring our colleague Sara Danger: an upcoming live-recorded interview with Wangerin and her essay, which appears in a new book honoring his work. The interview may be viewed online October 9 at 1 p.m. (CST). For more information, visit Hutchmoot Homebound, 2021. A tribute adapted from her chapter in Songs from the Silent Passage: Essays on the Works of Walter Wangerin, Jr. (Rabbit Room Press, 2021) can be found below. 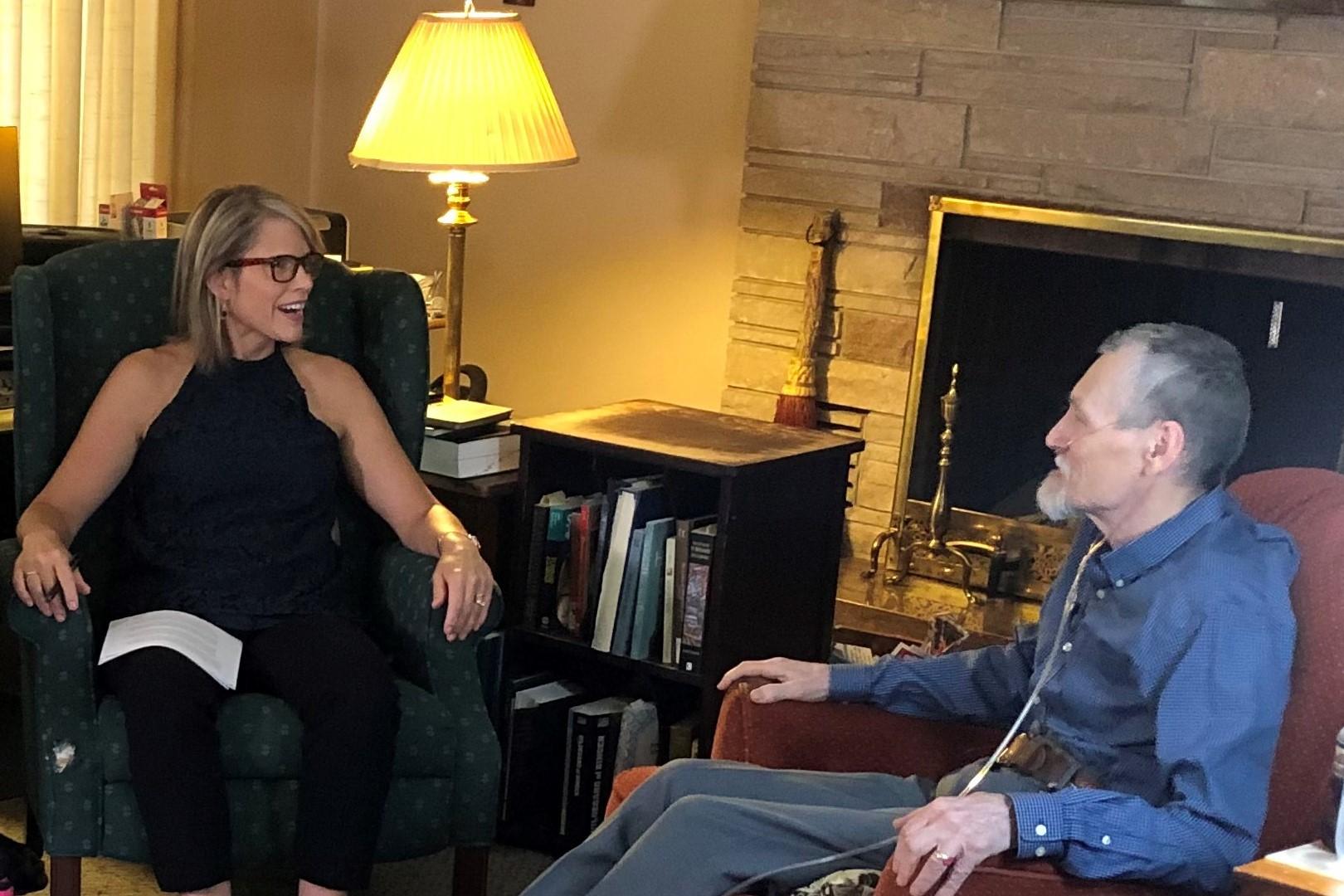 Gifts from the Storyteller:

In Memory of Walter Wangerin, Jr.

Before I encountered Wangerin’s many published works for children and adults, I met Walter Wangerin, Jr. the storyteller. In January 2004, while visiting Valparaiso University’s Chapel of the Resurrection for the first time, I watched intently as a bearded robed man stepped forward to preach. Even before he began, his eyes searched the crowd. Though his lectionary text was from Isaiah 6:8—“Then I heard the voice of the Lord saying, ‘Whom shall I send? And who will go for us?’ And I said, ‘Here am I. Send me!’”—he did not preach or pontificate; instead, he told a story of his days as a young pastor called to a church in Evansville, Indiana. He wove his story humbly, organically, retelling his first assumptions about Isaiah’s calling and then relaying how a few youth in his congregation had caused him to reexamine this theology. As he spoke, he roamed, pacing back and forth within the vast chapel space. He chewed his lips, scowled, smiled, and looked up to the heavens. Row upon row of upturned, hushed faces, including mine, became enfolded in his story. He told us how he had wrongfully chided the young parishioners, rebuking them for behaving as hoodlums. As the story turned to confession, we experience the pastor’s repentant realization: the troublemakers were scared children, sufferers and survivors of the sins of their parents.

As I sat down to hear Wangerin’s story that day, I must admit, I, too, was on edge. I was on campus for a three-day long interview for the Lilly Postdoctoral Fellowship. And while I had thought deeply about the aesthetic shape and cultural resonance of stories as a longtime student of English literature, experiencing Wangerin’s story that day provided a new perspective on the magnetic pull and resonance of a story well told. It was the first time since childhood that an oral storyteller had so completely involved me in story.

Over the past sixteen years, my awe for Wangerin’s integrity as a storyteller has grown. During these years, I have come to know him as a colleague and a friend. Throughout the duration of our friendship, he was living with terminal lung cancer. Still, no matter how frail his health, he continued to preach and to teach. His red truck daily parked outside his writing studio signaled that the writer was practicing his craft, producing upwards of three books at a time. And during this time, Walt’s ingenuity and generosity as storyteller continued. No matter how busy, Walt agreed to speak to my students of children’s literature nearly every year for the past fifteen; his last visit taking place in March of 2020.

Each time he visited a class, I relished the opportunity to observe his storytelling and its transformational effects. Even when I have heard one of his narratives multiple times, they were never the same in the telling. While the central structure would remain intact (what Wangerin called the “houseness” of the story), in every telling, he added new details, living tendrils and sprouting leaves that gave new shape to the story’s resonance. Each time, his voice would draw us in. Restless, shifting, cell-phone checking bodies would become subdued and entranced as the storyteller moved his listeners inside the house of his tale. As the hush would fall over his audiences, he knew, as he told me once, that we had “entered the tale;” and in doing so, we sensed more deeply the power of stories to name the realities and give new shape to the mysteries of our lives.

On July 27, 2021, I had the opportunity to interview Walter Wangerin, Jr. for a live-recorded presentation for Hutchmoot, a conference on art, storytelling, and music hosted by Rabbit Room Press of Nashville. The final picture I have of myself and Walt, which was taken by my husband, Paul, captures the story teller well. In this image, Walt had just left his writing desk, and without pause, he took his seat, ready for the video cameras to roll. In that brief moment before the interview launched, he was telling me about his tomatoes, which he was cultivating outside his studio. Even this account of his garden was a story, short yet convicted and true.

When the interview began, Walt rose to the occasion as he always did. And through his tendril-sprouting details, he drew his listeners inside his accounts of how stories work to name the deepest mysteries of our lives, including our own mortality and death. While none of us knew this would be our final conversation with the storyteller, that day he was in great form. The reality of his death the next week caught us all by surprise. And yet, as he was also keenly aware, the shaping influence of his stories would live beyond him.

For everyone fortunate enough to have been in a room with the master storyteller or read his stories made print, Walt’s words have immersed us in the power of stories. Even more, these stories rooted us more deeply in the ultimate mystery and good news of the one who truly names us and promises us life more powerful than death. May you rest in peace, dear friend and shaper of stories, knowing that your words live on, voicing again and again God’s enduring presence in our lives.

Sara R. Danger is an Associate Professor of English at Valparaiso University. This tribute was adapted from Songs from the Silent Passage: Essays on the Works of Walter Wangerin, Jr. (Rabbit Room Press, 2021). Published with permission. “Story & the Child’s Imagination” (Sara Danger, Walter Wangerin, Jr.)–will appear on Hutchmoot Homebound, 2021 (a conference on art, storytelling, and music, sponsored by Rabbit Room Press) on October 8, 2021 (to view the interview during this the online event, registration information is found at Hutchmoot Homebound, 2021).