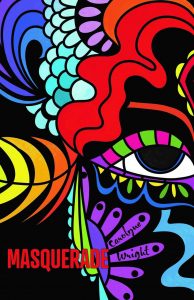 Wham: The Poetry of Carolyne Wright by George Drew

The thing about masks, which of course a masquerade implies, is that they both reveal and hide. In other words, the notion of identity is really what masks are about. So it is in Carolyne Wright’s stunning Masquerade. Lyric, narrative, multi-form, metaphoric, colloquial and formal, and deeply revelatory, it dissects an interracial relationship. That is to say, it explores identity and how cross-racial and -cultural realities affect that relationship. The sheer beauty of the poems does not retard their psychological honesty and truth-telling, both joyful and painful.

The opening poem, “At First Sight,” immediately establishes the psychological dialectic of the book, opening with one italicized word set off as a separate line: Wham. That one word is a summary of both the effect of the poems on a reader and the powerful emotions, both positive and negative, physical and spiritual, generated by the relationship between a black man and a white woman. The poem ends:

By the time a reader reaches the last section of the book, it is clear that Masquerade is both. The relationship, as it unfolds over time and space, is both Cupid and Caliban.

Many of the poems are set in New Orleans. That mythic city is the jazz- and blues-infused background radiation to the ins and outs, the ups and downs of the relationship, perhaps never more powerfully than in the poem “Round: What Love Is”:

The unknown saxophone rises
to a crescendo, and I step into the space
between your table and your chair…

…and your big hand raises
lands dead-on my temple, shatters
my glasses…

This poem and two others focus on that slap, the physical and emotional climax of a relationship, both the romantic heights of its splendor and the depths of its dissolution, and, over time, the evolution of the self and that of another—that is, identity, the assorted masks both chosen and not chosen.

Most stunningly, in the third “slap” poem, “I Forgive,” mask in the sense of identity is presented in the form of body parts. What the speaker is forgiving is her hands, arms, ears, heart and tongue for their reactions or lack thereof to the slap. For example, she forgives

And most tellingly, at the end, when the cop asks her what they should do with him, she forgives her tongue for answering, “Let him go.” It’s as if the speaker’s body itself is a stranger—a separate identity, a mask. If Martin Luther King’s dictum that the universe bends toward justice is true, then it’s equally true that this relationship, as it reaches the climactic and symbolic slap, has, much like a musical composition, bent toward a crescendo of dissolution.

Timely and incisive, Carolyne Wright’s Masquerade is a book that should be read by everyone, especially at this juncture in our history. It is that powerful, and that telling.

George Drew is the author of nine poetry collections, including Pastoral Habits: New and Selected Poems and The View from Jackass Hill, winner of the 2010 X.J. Kennedy Poetry Prize, both from Texas Review Press, Fancy’s Orphan, Tiger Bark Press, and most recently Drumming Armageddon, Madville Publishing, 2020. Drew also has published a chapbook, So Many Bones: Poems of Russia. He has a new chapbook coming out titled Hog: A Delta Memoir, Bass Clef Press, and a book of essays titled Just Like Oz, Madville Press. He has won awards such as the South Carolina Review Poetry Prize, the Paumanok Poetry Award, the Adirondack Literary Award, the St. Petersburg Review Poetry Contest, the Knightville Poetry Contest, and in 2020 the William Faulkner Literary Competition.