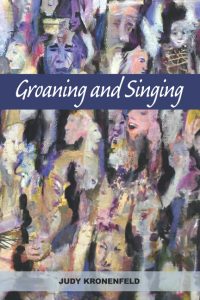 We are often told that age brings wisdom. This commonplace rests on the assumption that experience builds understanding. The idea is that when we have been around long enough, we will begin to perceive patterns in our lives that were not so visible before. Such a perspective might occasionally allow escape from the lure and flash of the immediate moment, so that we may gain a vision of our own place in the world and in history. Judy Kronenfeld’s new collection, Groaning and Singing (FutureCycle, 2022) takes as its subject this long view.

In the face of the insistent distractions connected with our individual lives, it can be difficult to escape the moment. The body itself is probably the most insistent of these. With age, it makes its presence felt more often than in youthful years, illness and injury as well as the death of loved family and friends making us increasingly aware that we are “born with dual citizenship / in the countries of the sick and hale” (“Going Downhill,” 67).

In the throes of such awareness, with the body constantly springing its slow leaks of “bone/crumble” and “dental devastation” (“Scare-Crone, 48), Kronenfeld likens her body to “an enormous ridiculous / parade balloon that won’t float” (“Chronic This and That,” 36). She notes its decline, yet hopes for it to “lighten, rise, so [she] may / be […] heedless of body” once more (36).

Because “the black ox has not yet trod / definitively on [her] toe” (“Scare-Crone,” 48), the poet at times escapes hyper-awareness of mortality when imagination grants her the weightlessness she hopes for. This book begins with such moments of vision, in which she gains access to the past and future beyond her individual life.

During these moments, the mind retains its facility to travel through time, to regain and indeed recreate the lost past. In her earlier work, Kronenfeld has frequently written about growing up as the child of immigrants in a New York tenement, lovingly reconstituting this world’s landmarks and people. But in this book, these memoir poems become part of a larger project, aimed at rescuing the beloved dead.

The poem “Saving the Dead” is the first in the collection to articulate this goal. It bears an epigraph from Theodor Adorno: “Our memory is the only help that is left to them.” This quotation, from a piece Adorno wrote in 1937 about a Mahler song cycle adapted from poems by Friedrich Rückert, is part of a longer passage that likens the dead to those who were “murdered by the living,” “whose life [the living] must save, without knowing whether the effort will succeed” (Adorno, “Marginalia on Mahler”). That concept is central to the poems in this collection, which amount to an imaginative effort to resuscitate those the poet has lost, as well as those who perished in the Holocaust and are dying still in more modern atrocities.

This poem first restates Adorno’s argument. The living carry the dead “like persons / still unborn, as if everything they might be again / awaited them” (24). We carry the genes of our progenitors and the memories of our shared past, and this, along with the grace of family photograph albums, gives the poet imaginative access to her parents’ lives, before and after her arrival.

However, there is a price to pay for such vision, since in the accelerated flow of time such moments foster, we are also “carried towards / the indignities of our own bodies; […] about to be undone; undone/” (25). This line’s final slash suggests the possibility of continuance, for the very relentlessness of time’s flow offers a kind of hope. Beyond the extinction of the individual, it allows the poet to imagine her own “progeny / rebirthing [her] in all [her] hope— / a lustrous dream of being carried forward” (25).

It is not just Kronenfeld’s own imaginative efforts that allow the promise of such escape, but that of art in general. Kronenfeld’s ekphrastic poem, “The Comfort of Design,” describes Hokusai’s painting Under the Wave off Kanagawa, noting how “the palate of the wave is striped / quite evenly in light and navy / blue,” how it “mirrors Mt. Fuji / in the distance—resembles a hill / of vanilla ice cream beginning to melt / in a deep bowl” (74). By portraying the wave, which threatens imminent disaster to the people in the painting’s tiny fishing boat, in such delicate detail, the painter has “[flattened]” “the terror of the monster wave,” turned it into art, created “for delight” (74).

It is the job of the artist to straddle a difficult line. On one hand, these poems do not flinch from life’s horrors, from the body’s inevitable demise, from the devastation wrought by natural and human-made disaster. On the other, they also take on the task of rescuing our existence, turning it into beauty, to give us hope. These poems radiate the elegiac lyricism of Kronenfeld’s earlier work while also taking a hard look into the darkness.

Robbi Nester is the author of four books of poetry and editor of three anthologies. Her poems, reviews, articles, and essays have appeared widely, most recently and forthcoming at California Quarterly, SWWIM, MacQueen’s Quinterly, Minyan Magazine, Artemis, Live Encounters, Gyroscope Review, and Rhino.