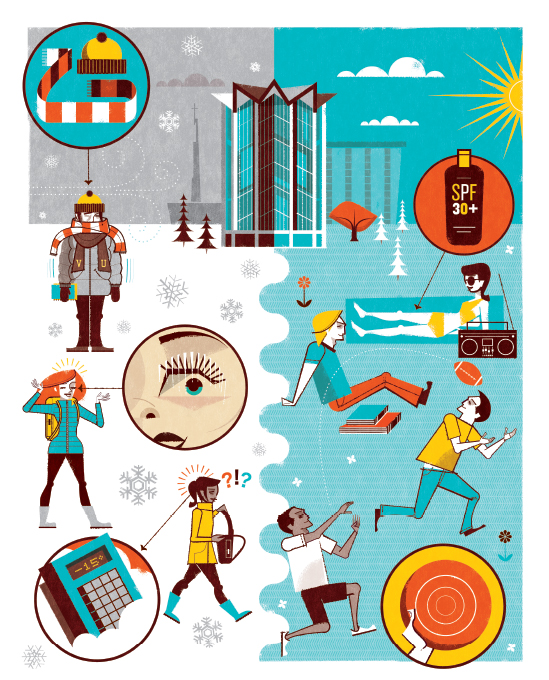 Though the Center for the Arts, the Harre Union, and other campus buildings now sit in its path, “the tundra” was once infamously known at Valpo for the biting cold and wind that students experienced as they trudged across campus to class.

We asked alumni through the Valparaiso University’s Facebook Page to share their fondest memories, for better or worse, of the tundra, and here you will find a smattering of their responses.

Connect with Valpo’s various social media channels to join in on the conversation.

“I walked a mile to school every day when I lived in Massachusetts. But I was never so cold until I became a student at Valpo! I walked from new campus to old campus almost daily through the tundra. Only time in my life that my eyelashes became icicles! Glad I loved Valpo and the warm and caring professors and students!”
Jan Schur ’73 Duesenberg

“I survived walking through the tundra, from Lankenau to Gellersen, during the winter of 1979–1980. The subsequent winters, I returned with a heavier coat, thicker gloves, and more than one scarf, only to find out that the tundra winds could pierce through any type of winter outerwear.”
Sheila Valle ’83 Vaclavik

“I was just happy when the VUCA was built to help block some of the wind as I walked across campus.”
Chad Roggow ’97

“Walking the tundra from the library late at night to the Alumni dorm with my boyfriend on starlight nights — a romantic and endearing memory that will always be a part of my Valpo experience.”
Margaret Marsic ’80 Gariota

“In the January cold, I remember walking from the Union to Brandt with my nose hairs frozen solid. In the warmth of May, I remember some outstanding frisbee hucking on that wide expanse of green.”
Travis Scholl ’96

“Everyone talks about the cold walks, and admittedly the walk from Wehrenberg or Brandt to Gellersen was, at times, too cold for me to face, but on nice late summer and spring days, the tundra was the closest thing to a beach Valpo had. I remember students laying out, throwing Frisbees, footballs, and baseballs around. Others just set out a blanket or a dorm chair and studied. On several nice days, we placed a large amplifier in a Wehrenberg window and blasted WVUR to the masses (until professors in Urschel asked us to stop). I was actually upset when Schnabel Hall was built as a computer lab. The new computers were a great improvement, but I missed the open expanse extending to Gellersen.”
Joseph Guerra ’86

“I grew up hearing about Valpo and the memories of awful wind through the vast tundra from Karen Killmer and Jeff Killmer. Then I went to Valpo, and there was no such thing as a tundra!”
Amberly Killmer ’08 Ticotsky

“I know, you’re going to think I’m crazy. But, I loved it. I loved the open space of being able to see a 360 view of much of campus, especially the Chapel. And, in the winter, it was a contest to see who had to walk across it the most in a day — kind of a badge of honor.”
Michelle Buss ’92 Starks

“I can still feel my frozen eyelashes from walking to Gellersen through the tundra. I lost my calculator out there in the snow once. I found it in the spring. It didn’t work so well then.”
John Dudlicek ’93