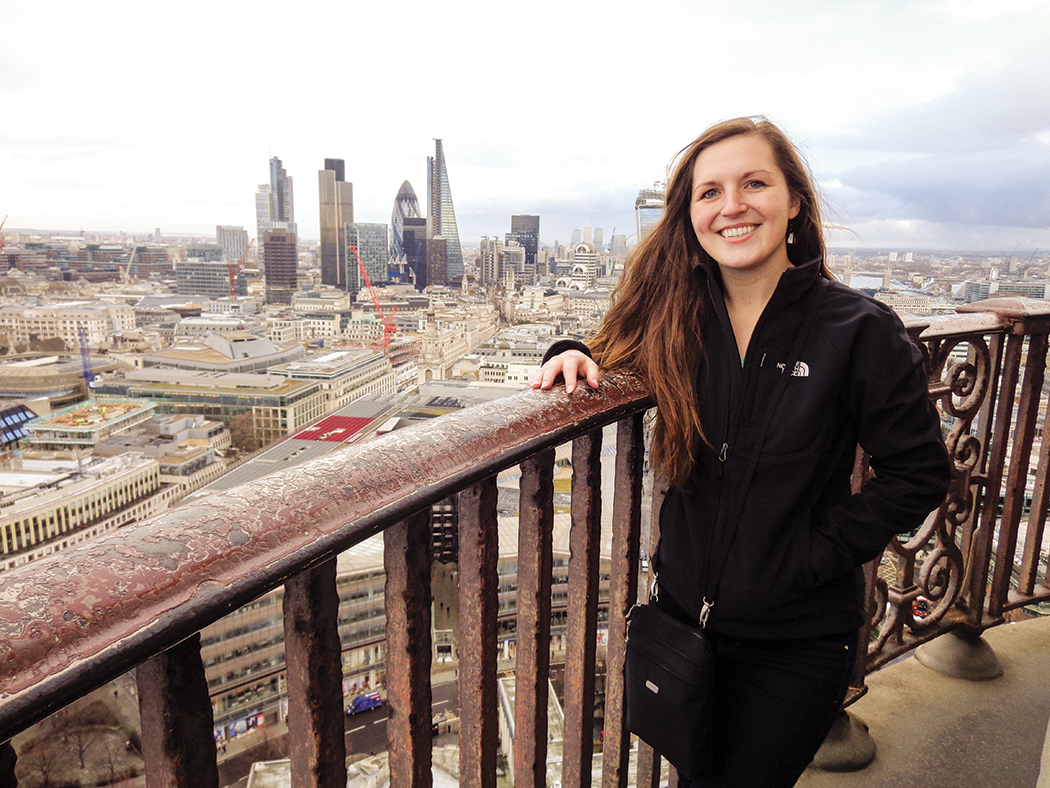 Shuffling between nursing classes in LeBien Hall, dance ensemble practices in the Center for the Arts, sorority meetings in Scheele, and as a volunteer with the local fire department, Frances Pollaro ’16 has been extremely busy earning a world-class, holistic liberal arts education at Valparaiso University. And her time studying in England through Valpo’s Cambridge study center enhanced her already enriching student experience.

A nursing major with a dance minor, Frances was drawn to Valpo for its direct-­admit nursing program.

“Taking biology, anatomy, and kinesiology classes in high school got me extremely interested in the medical field,” she says. “I enjoy the challenge of learning how the body works and the process of diseases.”

Frances was equally drawn to Valpo for its strong liberal arts tradition. She says the University has allowed her to pursue many of her interests, which in turn, has made her a more well-rounded student and future leader in her profession.

“Because Valpo is such a small and intentional community, I have been able to do so many different things,” she says. “I am lucky to be able to study nursing while also participate in dance ensemble and a sorority.”

In addition, Frances was able to study abroad, an opportunity she didn’t think possible given the strict demands and require­ments of a nursing program. But at Valpo, nursing students who are interested in spending a semester abroad are encouraged to do so.

“Studying in Cambridge opened my mind to a lot of different things,” she says. “Before studying abroad, I was somewhat shy and timid. But I learned that it’s ok to try new things on my own.”

Frances also reflects on the ways her Study Abroad experience will impact her future career as a nurse.

“My experiences abroad taught me to adjust to new situations and surroundings and that things aren’t always going to go smoothly,” she says. “The same is also true in the field of nursing. You have to take every situation and make the best of it.”

“By the end of the semester, Frances had a degree of confidence when trying out new things and launching into new experiences,” he says. “She successfully navigated through foreign countries, spent four months away from home, and managed herself personally, academically, and socially. She affirmed her ability to manage new situations.”

With a newfound passion to explore new things and the ability to see the world and pursue her career at the same time, Frances hopes to use her degree as a traveling nurse, focusing primarily on practicing in the emergency room.

“For the first year or two after graduation, I plan to stay in Northwest Indiana to gain experience in the ER. After that, I want to travel,” she says. “This will give me the opportunity to see the United States and figure out where I want to end up more permanently.”

Last fall, Frances gained practical, real-world experience as a volunteer with the local fire department, where she rode ambulances with EMTs. While on the clock, she observed how the EMTs perform in a variety of situations, and she helped assess whether each patient needed to go to the emergency room.

“I had the opportunity to see how the EMTs care for patients while they are being rushed to the hospital in a moving vehicle,” she says. “It’s exhilarating to see first-hand what they do.”
With a range of experiences that combine the liberal arts and professional preparation, Frances says she is confident she made the right choice to attend Valpo.