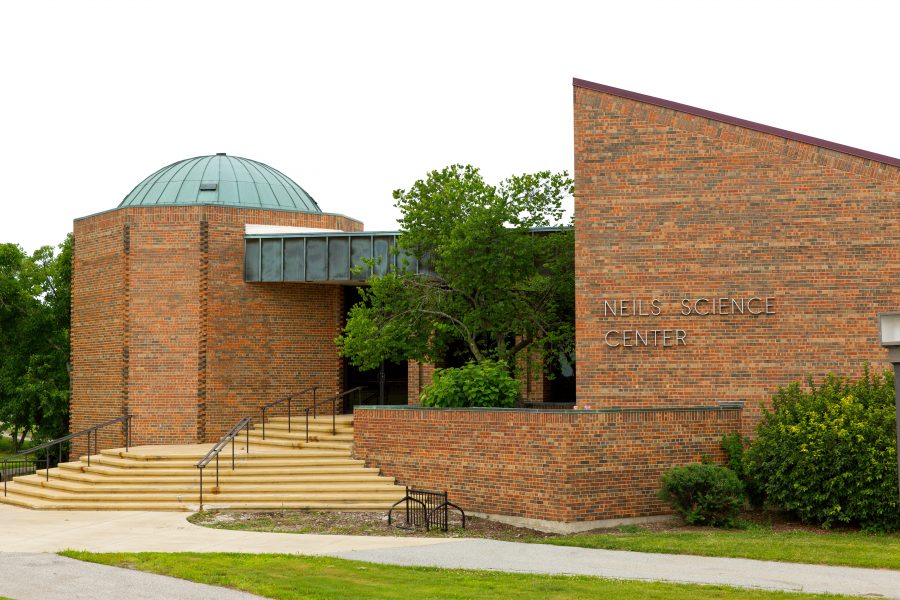 Now that the new Center for the Sciences is operational, some may be wondering what will happen, if anything, to Neils Science Center. The answer? Neils, just 50 years old, is a structurally sound building, and significant renovations are currently in the works with a projected completion in winter 2017. Once up and running, the renovated building will primarily house classrooms — a great way for Valpo to expand its science programs and for Neils to be an important part of STEM village!

#oneVALPO, an initiative created by Mike Avery and Valpo’s men’s soccer team during the 2013–2014 season, continues to have an impact on Valpo’s athletes and students. Now signed by all 19 varsity sports and more than 100 groups or individuals, #oneVALPO asks for a simple signature and promise — to show respect to one another regardless of beliefs or background. Education is another central goal of the initiative, and signers agree to become more educated about cultures different than their own.

Campus isn’t the only place where #oneVALPO is leaving its mark. Coach Avery and his team have ramped up efforts to bring the message to the Valparaiso community and, to that end, have helped lead #oneVALPO assemblies at most of the local schools, as well as one in Michigan City. Coach Avery has also made contact with businesses and local
organizations to spread the message of
education and respect.

With Valpo’s move to the Missouri Valley Conference, universities who are new to Valpo’s schedule will have the opportunity to sign the initiative, increasing the spread of the #oneVALPO impact.

We hope Alec Peters ’17 packed his sunscreen, because the move from Valparaiso to Phoenix is sure to come with the need for more SPF. The good news is, he’ll likely see more of the court than the pool, as he joins the Phoenix Suns this season.

For Valpo, Alec’s second-round draft marks only the sixth time in University history a member of the men’s basketball team has earned the chance to play in the NBA, and the first time since 1998.

During his time at Valpo, Alec was named a National Association of Basketball Coaches (NABC) Third Team All-American, Associated Press Honorable Mention All-American, and Horizon League Player of the Year. A formidable forward, Alec averaged 23 points and 10.1 rebounds per game, statistics that put him first in the Horizon League and eighth and 16th in the nation, respectively. The only player in the U.S. to be top 20 in both scoring and rebounds, Alec broke a number of program records as well: field goals made, games started, free throws made, and — in back-to-back games — the career rebounds and scoring records. 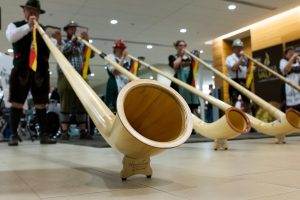 It is “most certainly true” that Oct. 31 marked the 500th anniversary of the Reformation — making it an especially commemorative time to be a Lutheran. But “what does this mean” for Valpo? To help remember this momentous occasion in the church’s history, Valpo hosted several church-related events throughout October.

Open to members of the entire University community from Oct. 4–5, Professor Sarah Hinlicky Wilson, adjunct professor at the Institute for Ecumenical Research, gave a series of lectures as part of the Gross Lecture Series. Established by Mr. and Mrs. Walter H. Gross, the John Martin Gross and Clara Amanda Gross Memorial Lectures are given annually by renowned religious leaders.

On Oct. 29 during the 10 a.m. service at the Chapel, Rev. Abdi Mulat from Ethiopia helped kick off the Walter Wangerin Jr. Celebration of Excellence in Preaching Series. Rev. Mulat is a pastor and professor at the Central Seminary of the Ethiopian Evangelical Church Mekane Yesus (EECMY). He was imprisoned five times and tortured for his faith. He is currently a Ph.D. student at Concordia Theological Seminary in Fort Wayne, Indiana.

Another event, Reformation Table Talks, featured six alumni from various seminaries. And on Reformation Day, Oct. 31, Valpo hosted a medieval dinner for students, faculty, and staff, which will become an annual celebration.

The Valparaiso University Chorale packed their bags for a special trip to Germany. From Oct. 28 to Nov. 5, the elite choir participated in commemorating the 500th anniversary of the Reformation in Wittenberg, Germany. The only international choir invited to sing in Wittenberg, the Chorale performed concerts, led a hymn festival, and joined with thousands of other participants in the official service and ceremonies included in this important anniversary in the Lutheran Church. St. Thomas Church in Leipzig — the church of Johann Sebastian Bach — will also host the Chorale, who will have the privilege of performing there with the famous Thomanerchor. The two choirs will also join together to perform for a Reformation festival service, as well as weekend services at St. Thomas Church. 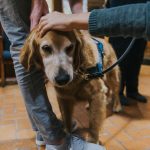 Campus Companions Therapy dogs make appearances throughout each semester, bringing comfort and affection to the campus community. Students needing a break from the pressures of classes, missing their pets, or simply needing snuggles find support in man’s best friend.

While the Chapel of the Resurrection is an awe-inspiring space, almost every student, faculty, staff, alumnus, or community member who’s ever been inside during summer or early fall has likely wished it was air conditioned.

Well, that wish became a (temporary) reality for the Lutheran Summer Music Academy and Festival, a residential music and worship program for high school students, who spent four weeks on campus. This was the fourth time Valpo has hosted the Academy but the first time the program’s organizers added a temporary air-conditioning system to the Chapel. Faculty from universities across the country and students from the United States and abroad enjoyed recitals, rehearsals, concerts, and worship services with added comfort. But those alumni who believe having no air conditioning in the Chapel is a staple of the Valpo student experience need not worry. The Chapel was AC-free once again come the beginning of the academic year and Opening Convocation. 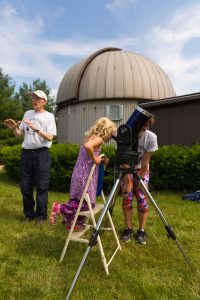 REACHING FOR THE STARS

On July 13, a constellation of Lake and Porter County families came to campus to celebrate National Summer Learning Day at Lakeshore Public Media’s PBS Kids Star Party. Valpo’s astronomy students and professors helped make the event special by conducting tours of the observatory and demonstrations of the telescope station. Attendees were even able to take part in space yoga!

Valpo Men’s Golf received President’s Special Recognition from the Golf Coaches Association of America for achieving a team GPA of 3.5 or better, one of 19 programs nationwide to earn the distinction. This is the program’s sixth consecutive year to receive this honor. Head Coach Dave Gring says the emphasis on academics is a critical component of the team’s culture, and each year they strive to play golf at a competitive level and attain high grades in the classroom. 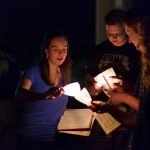 Candlelight Evening Prayer draws the University community together through prayer and music sung by candlelight. The theme for the 2017– 2018 Sunday evening Candlelight service is “Surely God is in This Place.” 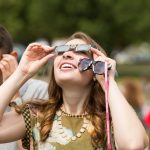 Hundreds of students, faculty, and staff gathered on the East Lawn in front of Neils Science Center to view the nation’s first total solar eclipse in several generations.

THE SEARCH FOR ALIEN LIFE

The research of Claire Mammoser ’18 and Laura Rowe, Ph.D., assistant professor of chemistry, is drawing attention from scientific publications across the nation for its innovative methods. Their work analyzes amino acids, the basic compounds that make proteins to support life, to determine how they would react to the harsh conditions on other planets and moons, representing a new approach to looking for alien life.

Valparaiso University is extremely grateful to those who have committed thousands of dollars in support of Forever Valpo: The Campaign for Our Future, a $250 million endowment campaign focused on raising permanent support for student scholarships, faculty development, and programs that prepare students for lives of leadership and service. A strong endowment is essential to the future of the University as it seeks to expand and build upon its core strengths.

▸ Nearly $1.4 million was received from the estate of the late Deborah “Deb” A. Tschetter ’71 Spannraft, and Stewart G. McMillan and Kathryn H. McMillan donated the building to establish the Innovation Hub, which was dedicated during Homecoming.

▸ The University received a gift of $1.8 million from the estate of Stephanie E. Umbach ’59 to establish the Umbach Family Endowed Scholarship Fund.

▸ Sue Heitmuller ’70 Zimmerman and Larry Zimmerman ’70 committed $625,000 to fund multiple areas of interest at the University. They established endowed funds for student scholarships, Study Abroad, the Institute for Leadership and Service, and engineering faculty development. Additional support will be directed to multi-year, annual giving commitments to the Valpo Fund and the College of Engineering Dean’s Fund.

There’s plenty of room in the inn — the Valpo inn that is! A University-owned campus Guest House was recently established at the corner of Union and McIntyre Court, down the street from the ARC and across from Guild and Memorial Halls. The Guest House provides short-term lodging for guests of the University, such as visiting professors or speakers and candidates for faculty and staff positions.

SALT DOES IT AGAIN!

The University’s campuswide organization, the Social Action Leadership Team (SALT), was at it once again — having raised more than $25,000 for the World Relief Campaign during the 2016–2017 academic year. This year, the group chose to raise money for The Okuzula Project: Transforming Bukasa through Diagnosis. Their significant donation will help fund the purchase of diagnostic equipment for a medical center in Bukasa, Uganda, which sees approximately 450 patients per month. Way to go, SALT — you’re on one long awareness-raising and giving streak! 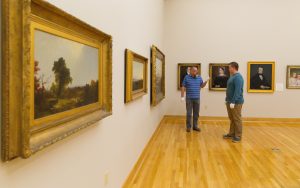 The Brauer Museum is home to a number of interesting exhibits this fall.

“The Indiana Dunes Revisited: Frank V. Dudley and the 1917 Dunes Pageant” — For more than 40 years, Dudley painted the Indiana Dunes. This centenary exhibition includes more than 55 works of Dudley’s, plus a book by Dudley scholar James R. Dabbert.

“Old Master Prints from a Private Collection” — This exhibit will include prints of important pieces by well-known artists such as Rembrandt, Durer, and Goya.

Visit valpo.edu/brauer-museum-of-art/exhibitions for details about the Brauer Museum’s upcoming exhibits.

Although 2017 marks 100 years since the passing of Henry Baker Brown, his legacy is felt throughout Valpo’s campus. Former President Brown’s death coincided with the 44th anniversary, to the day, of the founding of the Northern Indiana Normal School and Business Institute in 1873. By 1875, enrollment reached 900 students, making it the largest of its kind in the nation. President Brown’s entrepreneurial vision established the foundation for the Valparaiso University we know and love today. 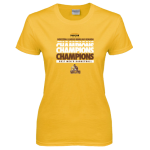 OPENING
…but, thanks to Cory and Blair, Valpo is now home to Ricochet, a unique, gourmet taco joint, featuring prime rib tacos, Korean barbeque tacos, and beyond.

BIKES!
The city of Valparaiso launched a bike sharing program, Valpo Velocity, and three of the eight bike stations are located on campus!

CHEMISTRY
Valpo’s new home for the sciences, The Center for the Sciences: Chemistry and Biochemistry, opened this fall. NIPSCO presented Valpo with a check for nearly $150,000 for energy rebates on the project.