As Valpo makes its move to the Missouri Valley Conference, the University celebrates the history of athletics — a tradition of excellence in competition and in the classroom that has long been part of the Valpo experience. Anywhere from rare gems to true markers of Valpo’s legacy today, these photos highlight the longevity of athletic excellence that spans across time and sport. 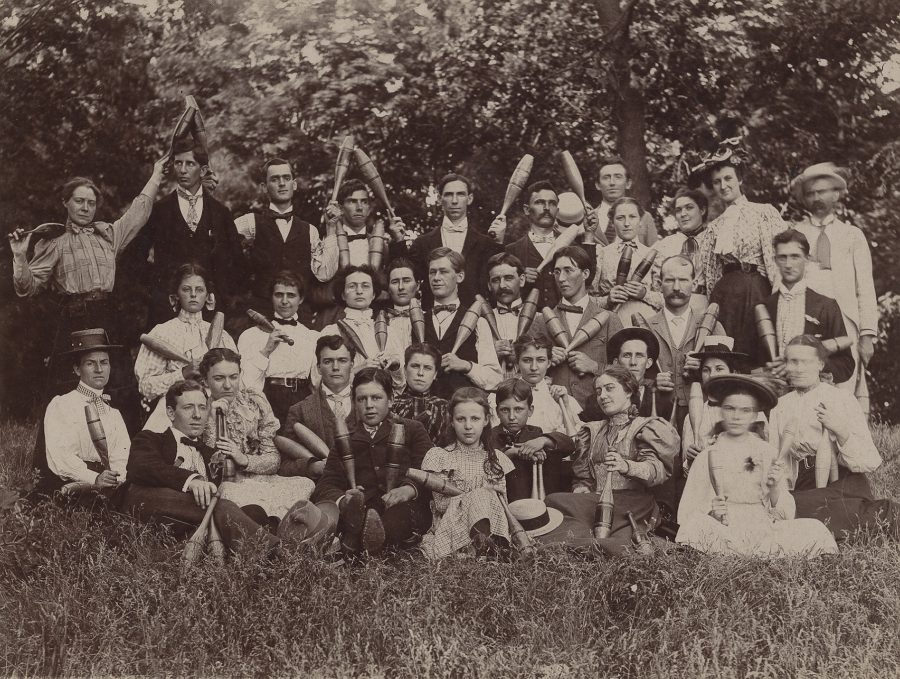 1898 Club Swinging Class
“Light apparatus,” which included work with wands, dumbbells, and Indian clubs alike, was one of the few available physical activities for female students during the final years of the 19th century. Other permitted — and required — activities included Swedish and general gymnastics, military tactics, and folk dancing.

1902 Fencing
Though he believed intercollegiate athletics were an academic distraction and unnecessary expense, former president Henry Baker Brown supported athletics activities used as recreation — a way for busy students to have fun and “blow off some steam.” Thus, the fencing club took shape, and matches were held in the dining hall along with Indian Club competitions.

1924 Shadoan
Valpo’s tradition of being a basketball powerhouse dates back nearly 100 years to 1922, when William P. Shadoan became the Crusaders’ coach. Under his guidance, the “Victory Five” — the same five teammates who played almost every minute of every game — finished 24–4 and won the Western Inter-State Conference championship in 1923. Perhaps foreshadowing the legendary “Miracle on Union Street” (see 1988), Notre Dame football coach Knute Rockne presented the squad with their championship trophy.

1942 Godfrey Heinecke
Boxing was first introduced as an intercollegiate sport at Valpo in 1928, but the sport was popular among students even prior to this official beginning.
In fact, in 1909, Erle Stanley Gardner, a Valpo law student at the time, left the school after he was forbidden to hold boxing matches in his room. It wasn’t until 1942 that the team, coached by Professor Ernest G. Schiebert, competed in the Indiana collegiate boxing championship, hosted that year by Valparaiso University. Three Valpo pugilists — Godfrey Heinecke, Fritz Mueller, and Ray Wilcop — advanced to the national collegiate tournament held in Baton Rouge, Louisiana. 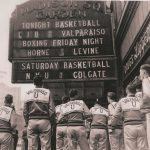 1945 Men’s Basketball Team at Madison Square Garden
The Crusaders’ first trip to Madison Square Garden occurred in 1945. Valpo defeated Long Island in the famed venue and followed the victory with wins against Holy Cross in Boston Garden and Hamline in the Buffalo Auditorium. Dubbed the “world’s tallest basketball team,” these Valpo men were the sole athletic team on campus at this time, as the University had suspended all other sports due to U.S. involvement in World War II. 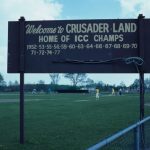 1949–1978 Ruth Brown
Ruth Brown joined Valpo’s faculty in 1949 and became an important leader in women’s athletics. Coach Brown served as the field hockey coach for more than 275 games and was chair of the women’s physical education department from 1965 to 1977. In 1977, the women’s and men’s physical education departments converged, and Coach Brown became chair of the department as a whole. Coach Brown further paved the way for female student-athletes when she became the first coach of the women’s basketball program, formed in 1968. During her tenure with the team, (1968–1978), she coached more than 230 games.

1950 Cigar Bowl
The 1950 Cigar Bowl brought the Brown and Gold football team into fierce competition with Lacrosse State Teacher’s College. Sponsored by the members of the Shriner’s Egypt Temple and used as a fundraiser for the Shriners’ Hospital for Crippled Children, the game brought the two unbeaten and untied teams nose-to-nose. When the clock ran out though, Lacrosse was on top, defeating the Crusaders 47–14.

1970s Synchronized Swimming: Women’s Synchro
The Gold Splash Synchronized Swimming Club was an organization composed entirely of volunteer swimmers and choreographers. These water-loving ladies put together themed shows for Spring Weekend and performed in other contexts as well — such as Valpo’s Guild Convention in September 1972, which featured the Gold Splash Club in a “Pool Spectacular.”

1976 Field Hockey
The Valpo women’s field hockey program piqued the interest of ladies on campus in the 1940s and 1950s, but no team officially joined the National Field Hockey Association until 1960. Entering the Women’s Midwest Hockey Association that same year, the team was coached for many years by Ruth Brown, who led them to a state championship in the 1980–1981 season. The field hockey team ended its run as a women’s sport on campus in 1987.

2000 Patty Cisneros
A three-time Olympian and two-time gold medal winner, Patty Cisneros ’00 was the first Valpo graduate to wear either an Olympic or Paralympic medal. Earning her gold as a part of the U.S. women’s wheelchair basketball team — and as captain of the team during her final Paralympics appearance — Patty participated in the Summer Games of 2000 (Sydney), 2004 (Athens), and 2008 (Beijing). Patty is now a fourth-grade teacher in Denver.

2003 Pioneer Champs
Valpo’s football team led its opponent, Morehead State, throughout the Pioneer Football League (PFL) championship game in 2003, and, in the end, defeated them 54-42. It was the team’s first outright PFL title since joining the league in 1993. The football team continues to be part of the Pioneer League today.

2004 Mid-Con Champs: Women’s Basketball
It was a back-to-back team of champions when the women’s basketball team won the Mid-Con Conference Tournament in 2004. Led by Katie Boone ’05, Betsy Rietema ’07, and Jamie Gutowski ’06 Stangel, the team defeated Oral Roberts 64–63 and advanced to the NCAA Tournament for only the second time in University history. The team made another appearance in the history books, marking the fourth time a women’s team achieved 20 wins.

2016 Men’s Basketball at Madison Square Garden
Sixty-one years after Valpo’s first trip to Madison Square Garden, the Brown and Gold returned to play for the 2015–2016 NIT Championship against George Washington University. Although Valpo did not pull out a win, the history and tradition behind this team, this place, and this sport made the trip a special moment for players and fans alike.