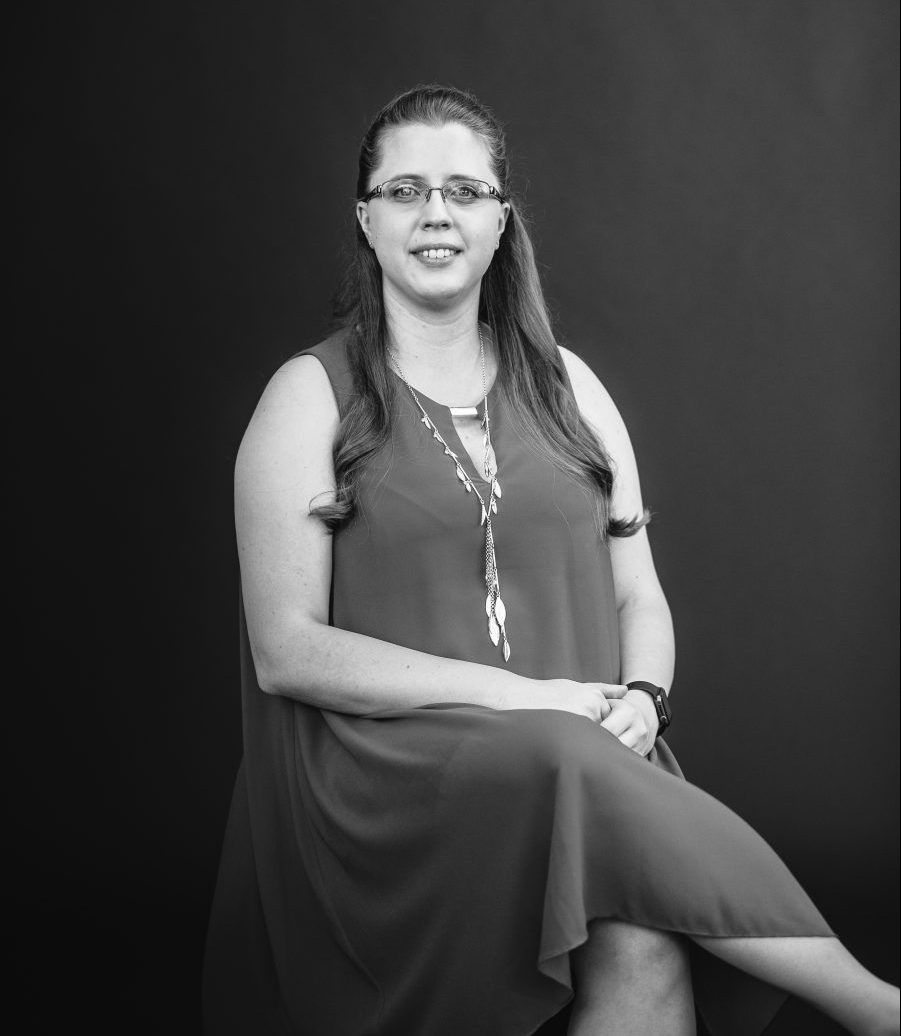 There was always something about the sky and stars that fascinated Kirsten Swanson ’10 Maynard.

As an elementary student, she was curious as to how things worked. She loved puzzles. Her analytical and curious mind led her to think about becoming a nuclear engineer or even a meteorologist. But just like the stars in the sky, she realized her career options were limitless. That’s why when asked to draw herself in second grade in her chosen career path she struggled.

“Everyone was drawing themselves as doctors, vets, ball players,” Kirsten says. “But I remember telling the teacher I didn’t want to do the project because I wasn’t going to choose my career in second grade.”

She had that same determination during her days in college at Valparaiso University. With offers from more than half a dozen colleges, it was the close-knit, family feeling of Valpo that made the University the right choice.
“It was important for me to be a name and not a number,” Kirsten says. “What attracted me to Valpo was the quality of the engineering department and the small class sizes.”

It was the flexibility Valpo provided as well that proved Kirsten was in the right place. Even though she was in the College of Engineering, she couldn’t shake the feeling she had as a child and harnessed her inner meteorologist. Kirsten says she was lucky to have professors and mentors to help her continue that dream. The University enabled her to take an elective during her senior year in the meteorology department, where she learned how those scientists utilized data.

“Taking that class was a perfect mesh of everything I was interested in,” Kirsten says. 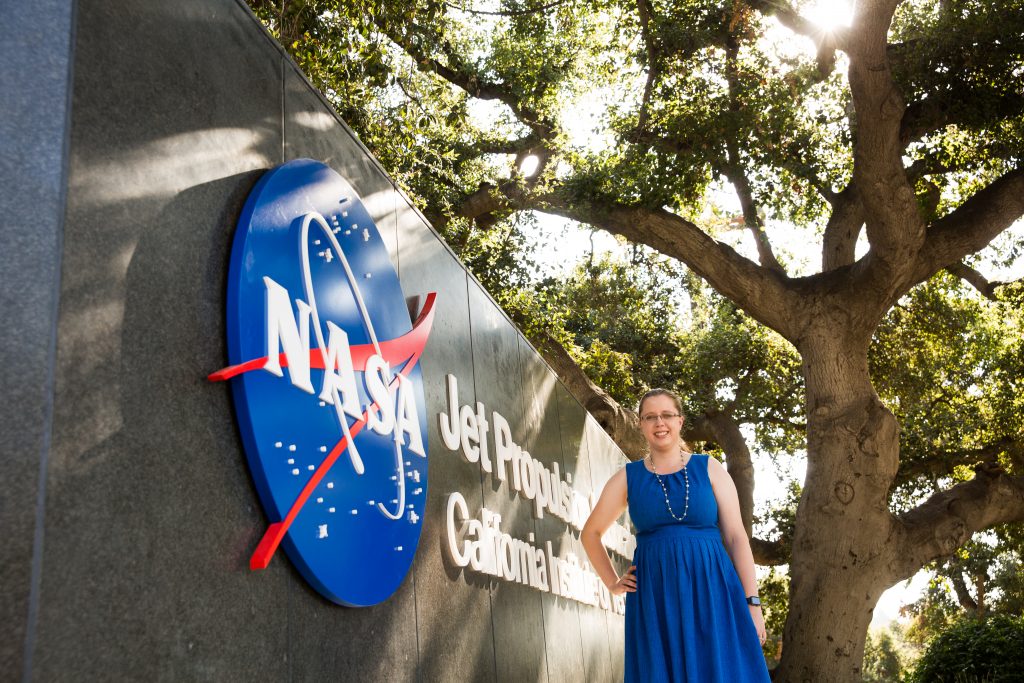 “ I can see Cassini orbiting Saturn and know that I have played a part in it. I have had my hands on and head in something that is flying in space and part of history.”

FROM THE CLOUDS TO THE STARS

The interest in meteorology and her mechanical engineering background led Kirsten to her first internship working on meteorological satellites. This proved a perfect prelude to her most recent work as a thermal engineer at NASA’s Jet Propulsion Laboratory — Cassini: The Grand Finale. Cassini, the NASA-designed spacecraft built specifically to orbit and study Saturn, launched two decades ago, when Kirsten was in middle school.

Cassini made its final journey in mid-September, passing between the rings and the planet before crashing and burning up in the atmosphere.

“Cassini is a phenomenal instrument that has helped us learn more about Saturn, its rings, and its moons than anyone expected would be possible,” Kirsten says.

Kirsten and her team were responsible for developing and verifying the thermal analysis software that provided temperature predictions for a passively cooled instrument on Cassini as it passed between the planet and its rings. This meant working on calculations using data and technology from the 1990s or older.

“This is the first time any man-made object has ever passed between the planet and innermost rings, let alone collected science data while doing so,” Kirsten says. “We will be analyzing this data for many years, possibly decades, to come.”

Kirsten has been lucky in her position to be part of this particular project from the beginning and seeing it to the end — also working on many different instruments. Many times, an engineer will do the calculations and the plans only to have it implemented by someone else. Equipped with a well-rounded set of skills from her Valpo education, Kirsten has seen it all — from testing to launch to data collection and analysis.

“I can see Cassini orbiting Saturn and know that I have played a part in it,” she says. “I have had my hands on and head in something that is flying in space and part of history.”

BORN TO BE AN ENGINEER

In 1675, Giovanni Cassini discovered that Saturn’s rings are separated into two parts by a gap, which is now called Cassini Division in his honor; he (correctly) presumed that Saturn’s rings were composed of myriads of small particles. It is this space between the rings the Cassini mission flew to gather much of its data.

Just as she was determined to combine her love of engineering and meteorology, during one semester at Valpo, Kirsten was determined to learn more about radio frequency identification (RFID). As a sophomore, Kirsten requested to do an independent study using RFID, but there were no mechanical engineering faculty who had the time or background to work with her on this project. Undeterred, Kirsten tracked down a faculty member who could help. This professor agreed to help, and the mechanical engineering department supported her work with equipment.

“This experience is just one example of how driven Kirsten is and shows her initiative to make sure she could work on this project, even when roadblocks got in her way,” says Peter Johnson, Ph.D., department chair and associate professor of mechanical engineering. “There are few students who I have seen who were as focused on being successful as Kirsten.”

Professor Johnson says Kirsten may have been born to be an engineer. “Some students come in and we have to mold and shape them into becoming engineers. We need to teach them engineering, of course, but we also need to show them how to be an engineer,” Professor Johnson says. “With Kirsten, we just needed to teach her the engineering. She came in knowing the proper attitude of being an engineer — that details matter, that it is important to behave as a professional.”

HELPING OTHERS REACH THE STARS

One aspect of Valpo that Kirsten loved was the ability to interact with a variety of students and professors. She even worked as a supervisor at the student help desk. This led to meeting her husband.

But it may have been her experiential learning with the Friends in Engineering (FIE) and Society of Women Engineers (SWE) that set the stage for the next engineer/meteorologist.

“The sciences have seen a decrease in funding, especially in elementary schools, due to a focus on testing,” Kirsten says. “Allowing kids to get their hands dirty and exposing them to more than one type of science or engineering likely will spark their interest in the subjects. We saw this firsthand in the Friends in Engineering program.”

As the president of the University’s SWE chapter both her junior and senior year, Kirsten and classmates started an outreach program targeting second through fourth graders. One Saturday a month students would come to campus to participate in fun and engaging experiments. They would build rollercoasters, work in the wind tunnel lab, and more.

Kirsten also started a mentoring program that paired a junior or senior with an incoming first-year engineering student. This work helped improve retention in the program as more experienced students served as mentors and friends even before the first day of classes.

“The biggest reason young women drop out of engineering is because they don’t have the support group they need,” Kirsten says.

The first year, Kirsten says, the program had a 100 percent retention rate. Not one student chose to change majors. In fact, one of Kirsten’s mentees is now an engineer at John Deere and the pair have become lifelong friends.

“America’s continued success in innovation is hinged on our involvement in STEM,” Kirsten says. “We need to attract the best and the brightest to the STEM fields to maintain and continue this history of innovation.”

A LIFE AMONGST
THE STARS 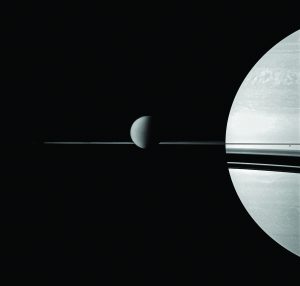 At Valpo, Kirsten learned her possibilities were limited only by her drive and determination, which was supported by the school and her professors. Her passion certainly has defined her purpose.

“Never stop dreaming. You never know what’s sitting around the corner,” Kirsten says. “Don’t let doubters tell you what you can and cannot do.”

Kirsten, for one, didn’t. “I ended up working literally amongst the stars.”