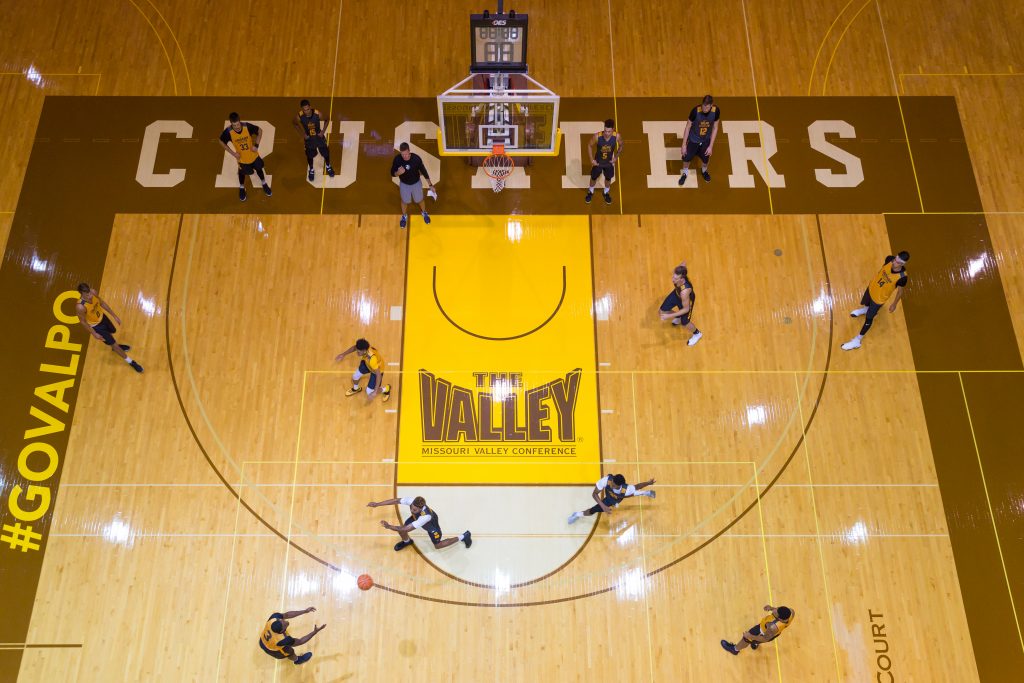 Valpo In The Valley

When Valparaiso University Director of Athletics Mark LaBarbera received official word of the University’s invitation to join the Missouri Valley Conference, he was simultaneously overcome by memories of the past and anticipation for the future.

The day Director LaBarbera accepted his current position, he assumed the responsibility to continue a tradition of excellence established by those before him. He’s done exactly that — overseeing two conference climbs in a decade’s time, a feat that puts Valpo in select company nationwide.

“The move to the Missouri Valley Conference represents the continued growth of Valpo Athletics,” Director LaBarbera says. “This exemplifies the University’s commitment to having a high-quality athletic department from the top down. We’ve had the support from the University at the highest levels, and we’ve used that do to everything we can to improve each year. President Mark Heckler has been a strong proponent of Valpo Athletics, and we couldn’t have done this without his tremendous support.”

BUILDING ON THE FOUNDATION

The news that Valpo had accepted The Valley’s invitation came on May 25 when Director LaBarbera tweeted a hype video announcing the conference move. A press release and social media blast from Valpo Athletics followed, setting off a series of warm welcomes from Valley institutions and igniting countless social media posts and tweets by enthusiastic fans, alumni, coaches, and student-athletes.

“We are thrilled to join the Missouri Valley Conference,” says President Mark A. Heckler, Ph.D. “The Valley is one of the nation’s most historic athletic conferences, and we are excited to engage with its outstanding member institutions and Valley leadership to strengthen both the conference and Valpo Athletics.”

Valpo’s first official day in The Valley on July 1 was an end, a beginning, and a continuation, all wrapped into one. The new conference affiliation marks the conclusion of a successful 10-year chapter in the Horizon League and the start of a new journey with unwritten pages ahead. But perhaps most importantly, it represents the continued growth of the University’s rich athletic tradition.

O.P. Kretzmann, the University’s president from 1940–1968, recognized the importance of Valpo competing on a national stage in the 1950s. Former Director of Athletics Richard Koenig helped elevate the University to the Division I level in the 1970s. And Bill Steinbrecher, director of athletics from 1979–2004, was instrumental in the development of the Mid-Continent Conference and the Pioneer Football League. Those individuals set the stage for Valpo’s ascension to its current status as a Missouri Valley Conference member institution.

Founded in 1907, the Missouri Valley Conference is the nation’s secondoldest NCAA Division I athletics conference. The parallels between the conference and Valpo are numerous, as the University boasts a storied athletics history of its own. It’s no coincidence that when Valpo joined The Valley, it became just the second new full-fledged member to do so in the last two decades. Valpo’s addition to The Valley unites two entities that have each exemplified stability and consistency. 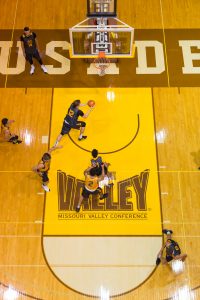 The men’s basketball team has won 14 league regular season titles during the last 23 years and made nine trips to the NCAA Tournament. Throughout the last three seasons, the Crusaders have won 82 games — a total that ranks among the top 15 nationally.

“Joining the Valley is something our institution strongly desired,” Head Men’s Basketball Coach Matt Lottich says. “The overall commitment to winning in The Valley is high, and we’re excited about the challenge of meeting that expectation. Our players are overjoyed with the competitive environment that we’re about to enter.”

“The Valley has a higher national reputation than our previous conference affiliations,” Director LaBarbera says. “It has historically been a strong RPI conference. It has a rich history of multiple teams going to the NCAA Tournament with teams receiving at-large bids. The level of competition across the board is higher; there’s no question about it.”

When Director LaBarbera came across a news story on the unfortunate trend of rivalries and traditions phasing out of collegiate athletics nationwide, he couldn’t help but beam with pride.

That’s because Valpo has done exactly the opposite, restoring old traditions and reigniting rivalries of yesteryear with the conference transition. The Crusaders previously shared conference affiliation with Evansville and Indiana State as members of the Indiana Collegiate Conference. The Purple Aces and Sycamores are two of the four most common opponents in the history of Valpo men’s basketball.

“One of the things that makes college sports special is the history and rivalries,” Director LaBarbera says. “When you have the opportunity to nurture that, you do it. To be able to go back to some important aspects of our heritage and tradition is special. This will help connect our fan base from one generation to the next.”

In addition, the Crusaders have prior conference ties with UNI and Missouri State in the Mid-Continent Conference and Loyola in the Horizon League. Valpo also currently shares a football conference with Drake, as both schools are members of the Pioneer Football League.

MOLDING CHAMPIONS ACROSS ALL SPORTS

The men’s basketball program may have Valpo’s most notable track record, but it certainly doesn’t stand alone when it comes to successful programs.

Since the start of the 2011–2012 season, the Crusaders have made 11 NCAA Tournament appearances — three in softball; two each in baseball, men’s basketball, and men’s tennis; and one apiece in women’s soccer and men’s golf. Valpo has also claimed 11 regular season league championships in that time — five in men’s basketball; two in men’s tennis; and one each in baseball, softball, men’s soccer, and women’s soccer.

The move to The Valley gives Valpo the new opportunity to compete in a conference that has a history of at-large NCAA Tournament bids across a number of sports.

“The move is a step up for all of our teams, and for some of them it’s a significant step up,” Director LaBarbera says. “We always want to compete at the highest level we can achieve. The success we’ve had is a testament to the quality of our student-athletes, coaches, and staff members. We have coaches that embrace and understand the Valpo experience. The athletic department is an important part of the Valpo experience for a lot of people, and we take that responsibility very seriously.”

W With the first season of Valpo in The Valley underway, the next step is for Valpo Athletics to continue to capitalize on the forward momentum of the department. 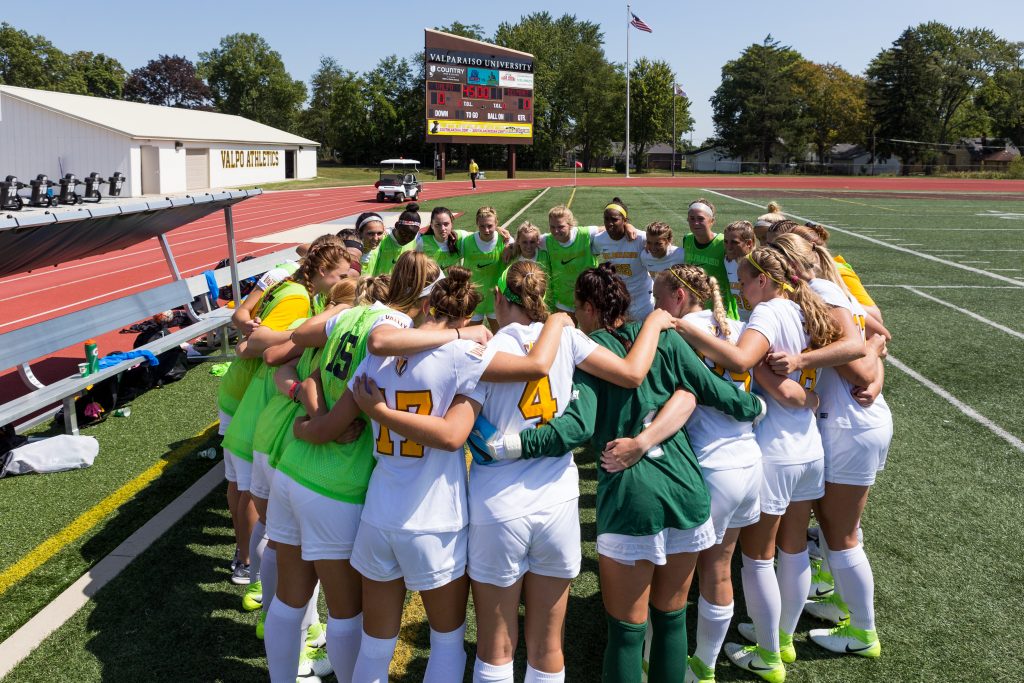 A LOOK BACK AT A DECADE IN THE HORIZON LEAGUE

2008 Men’s basketball earned its first win in postseason play since 1998 by edging Washington in the CollegeInsider.com Tournament opener.

2009 Men’s soccer enjoyed its first winning season since 1987, the start of a run of success under coach Mike Avery.

2010 Men’s basketball made a six-win improvement over the previous year and finished four places higher than the preseason poll predicted.

2013 Behind a Ryan Broekhoff buzzerbeater in the semifinal, men’s basketball won the Horizon League Tournament and made an NCAA appearance.

2014 Women’s soccer enjoyed the longest winning (12) and unbeaten (18) streaks in program history on its way to an NCAA berth.

2015 Men’s basketball won the Horizon League and advanced to the NCAA Tournament, where the Crusaders nearly knocked off Maryland.

2017 Men’s tennis shattered the team wins record for the fourth straight year and reached the NCAA Tournament for the second consecutive season.