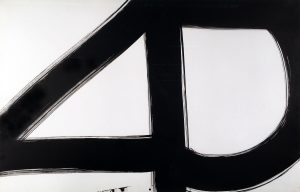 An exciting new addition to the Brauer Museum of Art’s permanent collection is a 1967 ink drawing by the American artist Al Held, purchased from a noted Chicago dealer with funds from the Josephine and Byron Ferguson Endowed Museum Acquisition Fund. Held was an artist with a remarkable career who started out with a painterly approach but who later created large paintings of impossibly deep perspectival spaces and shapes. The Brauer’s untitled drawing is a strong example of the artist’s work from a prime period that presents his early style while it subtly points to his later paintings.

Held began his career as an Abstract Expressionist who painted blocky, chunky forms very thickly so that the weight of the pigment and composition in general became key components in the appreciation of his work. Whereas some artists in this stylistic school pursued thinner applications of pigment for graceful and poetic effect, Held stayed with the primal gesture that communicated strength and conviction through tactile and visual means. Gradually, the blocky stylization of these early painterly pieces began to be rendered less meatily, less heavily, until Held found himself concentrating more on bold compositional decisions and configurations and less on a literally weighty pictorial surface. The artist rode this wave of daring compositional approaches executed with gradually less and less gesture as art history shifted from Abstract Expressionism to Minimalism, a movement more focused on a relentless simplification of the physical art object.

Held’s abstraction, his goal of activating the picture plane through increasingly minimal means, drove him to see the artistic potential in letters which, after all, are or can be shapes that in turn divide the spaces around and within them. For the first half of the 1960s, Held in his paintings used letters as subjects, where by modifying the shape of the letters and creatively relating the edges of the letters to the edges of the canvas he was able to make the familiar unfamiliar. Moving from the primal Abstract Expressionist gestural impulse, the artist came to create more elegant, even clever works that allowed him to fracture space and also introduce an intriguing aspect of legibility. The Alphabet Paintings from this period were enormous in size and fairly painterly, even though the artist was clearly moving toward a flatter surface overall.

The Brauer’s untitled drawing is from Held’s D Series, in which the artist used a capital letter D for his compositional experiments. The approach here is painterly, with evidence of the artist’s hand on the contours of the black ink shapes and in the lower left corner of the drawing. The sense of physical strength that seems evident in Held’s early work is seen here in the broad, authoritatively applied strokes of black, as well as the resulting white forms arising from the artist’s aggressive division of the picture plane. The Abstract Expressionist artist Franz Kline also worked in bold black strokes across a white surface, and he and admiring viewers have commented on his paintings being as much about the white as they are about the applied black; the same is true of Held’s drawing discussed here. Held uses a kind of calligraphy and works with a symbol having meanings and associations, but attempts at reading are foiled by the all-over nature of the composition that conflates figure and ground.

When visitors to the Brauer Museum have seen this drawing in the museum’s preparations room, patiently awaiting its installation in the Brauer’s New Acquisitions exhibition this coming summer, they have dependably said, “It looks like it says 4D.” Held likely didn’t intend for the 4 to be meaningful or significant in its communication of a quantity, and perhaps he saw the number formally or just abstracted the D to a greater degree or in a new direction. In any case, the idea of this piece and Held’s D Series in general makes the concept of 4D rather fun to consider. Drawings are typically two-dimensional. The Brauer’s drawing is floated within the frame so that viewers can see the edges of the paper and admire the way the pigment sits upon the surface of the sheet; the piece, in other words, is a crafted object existing in three dimensions, not just a crafted image. The spontaneity of Held’s gesture is evident in the aforementioned looseness of gestural passages, and the drawing only achieves its fullness of meaning after prolonged and sustained consideration. In other words, the fourth-dimensional, the 4D aspect of the drawing might relate to time. In time, viewers learn what Held captured in his deliberate and yet energetic work of art: That symbols of communication removed from literal or practical applications can still communicate, suggesting bodily states unfolding in time and confounding dependable viewing strategies. Held has taken the letter D and transformed it from a symbol into an agent that acknowledges the paper surface at the same time it reminds viewers that gestures are not autonomous but essentially and inextricably wed to context. Held’s gesture and statement in this case feel like messages in a bottle to the viewer, as the artist reaches across the fourth dimension to urge new perspectives.