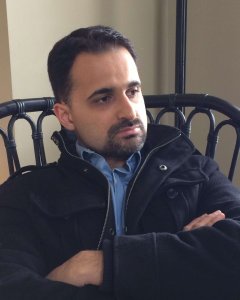 Love is a circle that ends when it ends.

I played the love I never loved so hard.

I returned to my lie, and I told it again.

Life is a circle that starts as it ends.

My body was a cage where I was pent,

I return to the lion, and tame it again,

But lust is a hunger only tongues repent,

And lovers stroke the skin where they were scarred,

Circles of pleasure that finish before they end.

I thought that I was better than other men,

That it wasn’t cheating, just a false start,

And now love is a race I cannot run again.

We never say exactly what we meant.

Flaws are forgiven less in love than art.

But if loss is a circle that starts where it ends,

I’ll return to this line, and I’ll write it again.

When he stepped out of the house that morning

to rake the leaves I could have raked,

the screen door clapped home against the house

so hard it echoed. The house was solid because he

was solid. Now the screen swings back and forth

endlessly swishing its net through the air,

more memories than body. If I step through

the other side is the same as this one,

and the only grass that’s greener grows

of the cross over my chest to x

myself out. I recheck all the light switches

three times before sleep, touching them

in every room like relics that will heal me.

I knew both grace and predestination once

If you’re wondering why the voice

doesn’t cry in the wilderness anymore,

the leaves have been laid to rest

and the voice laid waste to. These branches

than space between. Everything passes

in a basin full of water

and stared into his own eyes.

began to glow and swirl.

That’s when he took off running.

The pain that flamed through him

was flaming through the olive trees,

the whole landscape one forest fire

but everybody picnicking as usual.

He wrapped his ear in newspaper

and gave it to a woman at the Arles

brothel. Not a whore,

who mopped the vomit, gathered bottles,

of a stiff kerchief off the floor.

She worked as a maid in the brothel

because she could not find employment

as a whore. A dog had mauled her

arms and chest too much for that.

They kept her from the clientele

at night because the drunks who saw her

fell silent and set down their glasses.

She had evaded rabies that savage June

but not July’s medical bills.

A white dog half her size had knocked her

body to the street and jerked atop her

until somebody shot it through the head.

The gunshot left her deaf in both ears.

The artist sought her out

that cold December night and gave her

this gift, this fresh and fullgrown ear

so she could hear the church bells welcome Christmas

to Arles. You were mangled,

and I am mangled, too, he longed

to say. You paint this brothel

clean again with soap and water,

I scrub the filth off God with brushes.

Her visitor ran off before

she could unwrap the present

dripping on her snowy threshold.

He could not hear her scream

since he was running to a church

at an Auvers of his imagination

where all the windows held the same blue

as the sky behind them. Even

after her police report,

the orphaned ear was left with her.

She buried it behind the brothel

where clients sometimes staggered out

and watered it. In time it grew

into a flowering tree that flowered ears

a deeper amber with a hint of rust.

Gabrielle was still a maid by then,

still paying off the interest on her debt.

Scar tissue glistened on her arms and nipple craters.

One summer night, the stars began

to chase each other clockwise,

and when she touched the flame atop her candle

she came away with her thumb smudged.

She tiptoed to the tree of ears

and whispered into one of them

the thing she wanted most.

The next day, a little after noon,

the whores woke up and found her

naked at the foot of the tree, her body

and very cold, as cold as that December

night the artist tried restoring her.

Whines went up from all the stray dogs in Arles.

The girls admired her and stroked her curls.

Amit Majmudar is a novelist, poet, translator, essayist, and diagnostic nuclear radiologist. Majmudar’s latest books are Godsong: A Verse Translation of the Bhagavad-Gita, with Commentary (Knopf, 2018) and the mythological novel Sitayana (Penguin Random House India, 2019). A historical novel, Soar, is forthcoming in India from Penguin Random House in 2020, as well as a poetry collection in the United States, What He Did in Solitary (Knopf, 2020). His poetry has appeared in The Best of the Best American Poetry 25th Anniversary Edition as well as the Norton Introduction to Literature; his prose has appeared in The O. Henry Prize Stories 2017 and The Best American Essays 2018. He has served as Ohio’s first Poet Laureate. [Photo Credit: Ami Buch Majmudar]