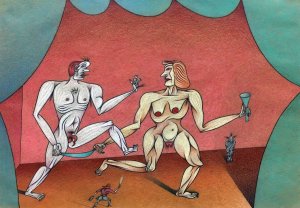 The Brauer Museum is delighted to have in its permanent collection a beautiful drawing by the Chicago Imagist artist Jim Nutt. Nutt was a member of a group of artists in the late 1960s/early 1970s from the School of the Art Institute of Chicago who called themselves The Hairy Who. The Hairy Who artists laid the groundwork for a style that came to be known as Imagism, characterized by whimsical and yet disturbing subjects, references to comics and popular culture, and works that reflect a very high degree of finish or technical skill. Nutt’s drawing, a little light, a little dark, is a particularly fine example of Imagist themes and of the artist’s notable work in the medium of colored pencil.

I remember seeing the exhibition of Nutt’s drawings at Phyllis Kind Gallery in Chicago that included this drawing. I was and am a fan of Nutt’s work and was familiar with the artist’s virtuoso work in painting, drawing, even printmaking. I occasionally saw Nutt’s colored pencil drawings and was interested in how he was adapting and interpreting his cast of characters in this medium, seeing his draftsmanship sharpen and gain clarity with each new piece. When I saw the Phyllis Kind exhibition, I was beyond impressed; Nutt had further refined his color palette which now included lovely peach and rose tones, built up through meticulous layers of delicate shading. The tableaus for the characters were now consistently stage sets presenting facets, stages of life, enigmatic scenarios played out in these shallow and artificial spaces. Figures and parts of figures underwent metamorphoses before viewers’ eyes in ways both playful and upsetting. The exhibition itself functioned as a work or entity, with each drawing adding to a quirky larger narrative that was irresistible in its pastel tones.

When a piece from this exhibition became available many years later, we at the Brauer Museum knew that it would be a good fit for us. Nutt’s incredible technical abilities are on display here, as well as his unflinching and amusing examination of psycho/sexual sexuality and the psyche. The drawing is on deacidified kraft paper, modestly-sized and yet commanding of attention with its colors and inviting detail. It demonstrates a key Imagist notion of extremely labor-intensive technique matched with a graphic representational approach reminiscent of cartoons. Through a careful attention to craft, the artist is able to imbue a playful world with feelings of the slightly macabre and even perhaps the sacred.

In Nutt’s evolving, transforming theater, torsos assume the character of faces, and vaguely Cubist bodies engage in a dance of life, a dance of sex, that is both a little light and a little dark in terms of its various dimensions and associations. The male participant in this scene is an absurdly befuddled figure whose lust has caused him to lunge in comic zeal, his face hilariously contorted and abstracted. The female is more dignified in her composure, almost classical in her profile. She takes in stride the male’s overtures, even prepared by holding in her hands a sheet and some kind of receptacle for the male’s urgent offering. In this silly dance, the male is driven immediately and in general (witness the hair in his palm) by his sexual needs, while the female navigates his attraction so that perhaps the pleasurable union can culminate in the propagation of a species at once able to largely control its desires while as well being a slave to them.

The tiny figure in the foreground literally sheds light on the scene. A wraith-like tiny figure in the back stands perhaps as a tiny embodiment of death. A little light from the one figure’s flashlight contrasts with a little dark creature that offers balance, a foil. Nutt uses graphic stylization, a frank portrayal of cartoonish sexuality, to show figures helplessly dancing in their whimsical sad-sack bodies while in their minds they undertake their act, their temporary ritual, with real determination. Through precision and inventive draftsmanship, Nutt enables us to examine our sexual lives in ways both light and dark that attempt to put us at ease and enable us to smile with recognition.

Gregg Hertzlieb is Curator and Director of the Brauer Museum of Art at Valparaiso University and a Contributing Editor to Valparaiso Poetry Review. Hertzlieb is the editor of the books The Calumet Region: An American Place (Photographs by Gary Cialdella), published in 2009, and Domestic Vision: Twenty-Five Years of the Art of Joel Sheesley (2008), as well as a contributor to The Indiana Dunes Revealed: The Art of Frank V. Dudley (2006). He has been awarded the Edward L. Ryerson Traveling Fellowship by the School of the Art Institute in Chicago and a Conant Writing Award for Poetry from Millikin University. His artwork has been exhibited widely, including at the Aron Packer Gallery, August House Studio, the Central School of Art and Design in London, Columbia College, Elgin Community College, the Goodman Theater, Struve Gallery, and the Ellen Firme Gallery.