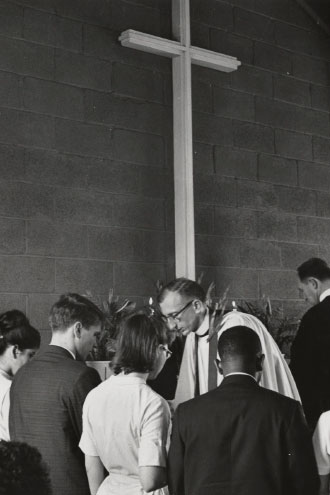 A single seat was left on the retired, clunker of an airplane. The ride was bumpy, and it seemed to last forever. But eventually the women and men arrived safely and joined thousands of others to fight for freedom and justice.

For one man, this opportunity was a pivotal step in a lifelong journey.

Fifty years ago, Karl E. Lutze, M.Div., associate professor emeritus of theology, and dozens of Valparaiso University students joined 25,000 people to culminate a march from Selma, Alabama, to Montgomery. They were marching in solidarity for the rights of African American women and men who were denied the ability to register to vote.

“I believe God puts opportunities in front of us,” Pastor Lutze says. “I believe God calls on us to reflect on the truth that God must share his love with all.”

Pastor Lutze tells the story of Alabama and so much more in his recently published book, “Into a Wider World.”
On a recent cold day in March, he and his wife, Gail, sat at their dining room table in their cozy home behind Loke Hall. The 94-year-old man told stories of days past; he wept, laughed, and read passages from the book as he remembered the women and men from Valpo and throughout the nation who sought equal rights for all.

Among them is his son, Peter Lutze ’68, Ph.D., chair and professor of Valpo’s communication department. The younger Lutze was a Valpo freshman at the time, and he knew he needed to be in Alabama after an attempted march to protest voting discrimination in Selma turned bloody. 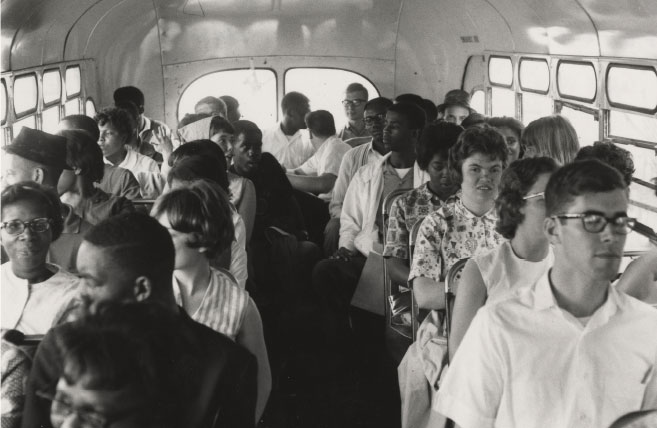 We were smiled upon and blessed, and we turned around at the top to a waving flood [of] black and white and colors pushing up behind us. We walked on another block, faces, smiles, fat women sitting on unpainted porches, and a boy with a dog and a little brother on the broken steps of a tiny box.

We curved past a Negro school, and we asked the children hanging out the windows what they wanted. They said “Freedom,” and they wanted it all now.

Pastor Lutze felt the same pull his son did. He thought of the good people of Oklahoma where he served for 15 years as pastor in struggling black communities — first in Muskogee and then in Tulsa — before coming to Valpo. He thought of his role as field secretary, and later executive director, of the Lutheran Human Relations Association of America, which brought awareness to race relations and social injustices. He thought of scripture passages “that call for Christians to stand in defense of those who champion the cause of the poor, who speak up on behalf of those who have been silenced, or those who simply looked ‘the other way’ — away from acknowledging the ingrained customs and practices that threatened the future of black youngsters — infants to those of college age,” he writes in his book.

For Pastor Lutze, getting to Selma would be challenging. All flights, trains, rental cars, and buses were booked. He knew he must find a way when then-University President Otto Paul (O.P.) Kretzmann called and ask that he travel to Selma to support the 40 Valpo students who would be there.

Fortuitously, a friend called to offer him the last seat on an out-of-use United Airlines DC3 that would be chartered by a group of Catholic priests and nuns. On March 25, 1965, wheels touched down and Pastor Lutze — and the Valpo students who traveled separately — would become part of history.

In his book, he writes about the discord — white people waving confederate flags and black people waving American flags, “watching and grateful that some people were brazenly standing at their side as brothers and sisters.”
The march was peaceful and resulted in the passage of the Voting Rights Act of 1965 and significant progress in the fight for civil rights.

When Pastor Lutze came upon the Valpo students, including his son Peter, he felt proud.

By no sense was there a feeling that this was the end of the story.

“The experience was unforgettable,” he says.

“As we left, the thickening, blackish clouds were gathering, and we found the crowd dispersing a bit hurriedly. As soon as our group had found our seats on the plane, our pilot announced his readiness for an immediate departure,” Pastor Lutze writes in his book.

“By no sense was there a feeling that this was the end of the story,” Peter Lutze says. “This was just the beginning of the story. The question is, how do you bring that back home? How do you change institutions? And that’s still a question.” 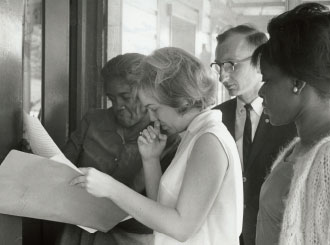 The younger Lutze says he believes the University’s role is to unify us in our diversity, and that debate, discussion, and argument can all lead to change.

Indeed, Valpo was changing; it always will.

Valpo welcomed African American students when many universities did not, and it commemorated Martin Luther King Jr. Day when Indiana’s legislature would not recognize the holiday.

And in the city of Valparaiso, race relations were still tense as some struggled with how to integrate people of color in the community.

Carrying her heavy bag, O.P. Kretz­mann escorted Inez Parker to the campus. Instead of going directly on a diagonal, short-cut route to the campus, they together went a block north to Lincoln­way Avenue. They walked the city’s main street as their route to the school. Peeking from behind curtains and in some instances stepping outside their little shops, all could see this president … carrying her suitcase, personally welcoming her. This highly respected leader of the community had made his statement and the message was clear. When the occasion called for standing up to be counted, O.P. was there.

Today, as Pastor Lutze looks out on Valpo’s campus from his front window, he sees a very different place than in the 1960s. A better place.

“It was a privilege to be a champion on the side of people forgotten or regarded as second class,” he says.

We are deeply saddened to report that shortly after this article was written, Karl Lutze died on May 7, 2015. Everyone at Valparaiso University is grateful to share this story and that Karl was able to read it before he became ill. Karl modeled leadership and service to church and society throughout his life, and he will be deeply missed. 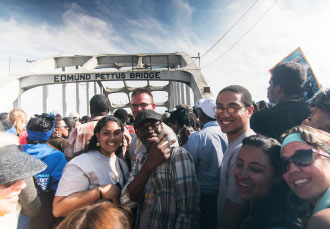 Black. White. Rich. Poor. Christian. Muslim. Valpo student Christina Crawley ’15 watched on the big screen as they came together, arm in arm, to march in the name of voting rights for African Americans.

She thought seeing the movie “Selma” would give her perspective before her trip to the Alabama town best known for the “Bloody Sunday” and other marches of 1965.

What Christina didn’t expect was how she and 51 other Valpo students, faculty, and community members would recreate history.

“My van to Selma alone had three white people, a Chinese woman, a bi-racial woman, a middle Eastern young woman who was born in Chicago, and me — a black woman from Gary,” she says.

More importantly, she says, they connected, formed relationships and returned to campus with ideas on how to continue to make Valpo welcoming and inclusive of all people.

“We can do so much in the classroom, but when you get students out in the world — seeing where history is made and meeting people who made it — it brings it home,” says Assistant Professor of History Heath Carter, Ph.D. “The students connected with the history in a new way. They saw themselves as players in the story; stories that are ongoing.”

Professor Carter led the trip in March to Tennessee and Alabama where 36 students, 13 faculty, and three community members immersed themselves in civil rights history. They browsed exhibits at the National Civil Rights Museum in Memphis, met Alabama’s first black federal judge in Birmingham, listened to President Obama speak in Selma, and crossed the very same bridge where, 50 years earlier, 25,000 people came together to fight voting discrimination.

Since returning, Christina says students have discussed a partnership between the Greek life system at Valpo and different cultural organizations on campus, among other initiatives.

“What’s so profound is experiencing this with other people from Valparaiso University who didn’t necessarily know each other very well,” Professor Carter says.

“I watched the group dynamic change, evolve and be knit together. People were having new, creative ideas about what they wanted to do when they got back home.”