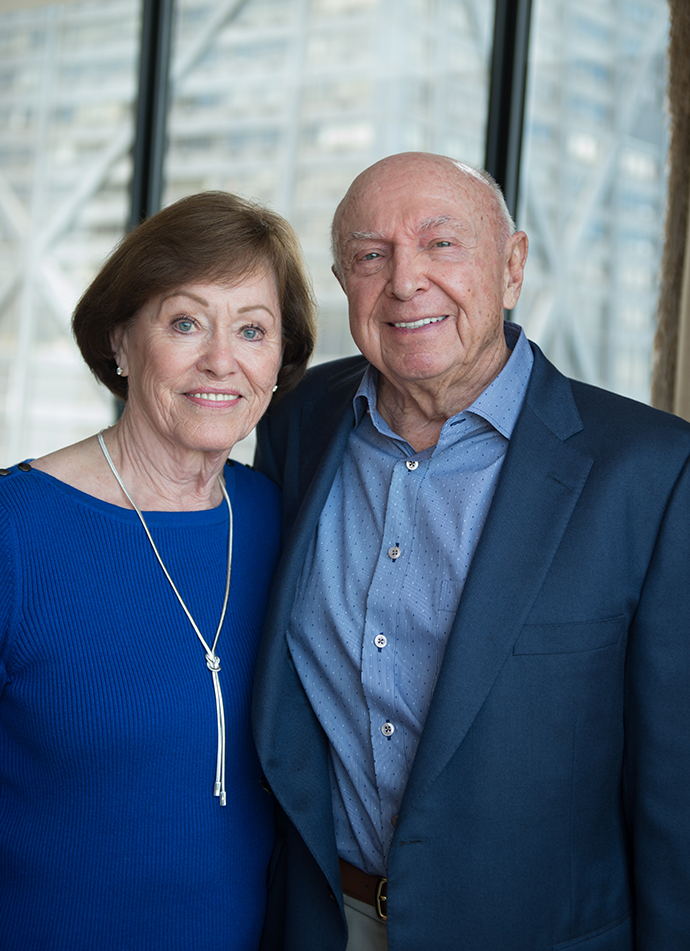 Jan and Paul Schrage reflect on Valparaiso University’s impact on their lives and make long-term commitment to Valpo Athletics.

Millions of people around the world tuned into the 2016 Summer Olympic Games. Throughout the 19 days of coverage, viewers likely noticed the frequent appearance of those familiar McDonald’s Golden Arches, promoting the official restaurant of the Rio Games.

The relationship between the Olympic Games and the fast-food goliath dates back nearly 50 years. The man who was instrumental in starting the connection between McDonald’s and Olympics sports marketing was Valpo alumnus Paul D. Schrage ’57, ’96H. Paul retired as the company’s senior executive vice president, chief global marketing officer, and a member of its board of directors in 1997 after 30 years of service.

Known as the father of the McDonald’s brand, Paul created the current Golden Arches logo in 1968. In 1996, it was recognized as the No. 1 brand in the world. Along with 13 successful advertising campaigns, including “You deserve a break today” and “It’s a good time for the great taste of McDonald’s,” Paul introduced the Happy Meal nationally as well as the Playland concept and the McDonald’s All-American High School basketball team. Under Paul’s leadership, McDonald’s provided the funding for the swimming pool in Los Angeles for the 1984 Olympic Summer Games.

The “Nothing but Net” McDonald’s commercial with famed basketball players Michael Jordan and Larry Bird premiered during Super Bowl XXVII in January 1993 and is widely referred to by sports journalists as one of the best Super Bowl ads of all time. The series only strengthened McDonald’s connection to athletic sponsorship and advertising, and it further demonstrated the ability of such a relationship to advance a corporate brand.

Paul was passionate about sports marketing as a means to elevate the reputation and recognition of McDonald’s, which is also evident in his work with Valparaiso University. Along with his wife, Jan Sievers ’59 Schrage, Paul recently committed $2 million to establish the Paul D. and Janet C. Schrage Endowed Recruitment Fund for Men’s Basketball. When fully funded, the endowment will provide a permanent source of support for the program’s recruiting activities.

“It was our idea to designate the gift for recruitment, because that’s where it all begins. We need to be able to have the opportunity to go out and contact high-potential players,” Paul says. “The competition is tough out there, and getting the right five guys on the floor at the right time will help Valpo gain attention, entice players to come play for us, and attract people to attend games. It’s a tremendous opportunity to showcase the University.”

The Schrages are long-time benefactors to the University and strong supporters of Valpo basketball. They funded the Schrage Basketball Wing addition to the Athletics-Recreation Center, which houses the men’s and women’s basketball offices. They also established the Paul and Janet Schrage Endowment to provide ongoing support for the facility.

“Paul and Jan are an ongoing encouragement to me personally, the basketball programs, and the entire Valpo Athletics family,” says Mark LaBarbera, Valpo’s athletics director. “Their long-term commitment to improving the experience of our student-athletes through the Schrage Wing of the Athletics-Recreation Center and their Athletics endowment places them in a very special group. Having an alumnus give back in this manner speaks volumes about the value of athletics here at Valpo.”

In addition to their philanthropic support, Paul and Jan are actively involved with their alma mater in a variety of ways. Paul served on the University’s Board of Directors from 1994–2004 and 2009–2015 as well as serving on the Campaign Executive Committee for Forever Valpo: The Campaign for Our Future.

“My relationship with Valpo has continued, and I’ve never felt disconnected,” Paul says. “It’s the quality of the people I met there that is critically important to maintaining relationships.”

One of the longest-lasting relationships fostered on Valpo’s campus is between Paul and Jan. The two met on Valpo’s campus as students and celebrated their 60th wedding anniversary in June 2017. They both came from strong Lutheran backgrounds and appreciate the University’s commitment to faith and learning, which helped prepare them for success following graduation. Soon after, Paul was working in sales near Jan’s home of Rock Island, Ill., where he was first exposed to a behind-the-scenes view of an advertising agency. After a glimpse into the exciting world of storyboards and commercial production, he returned to school and earned a master of science in advertising from the University of Illinois. Paul received the U of I’s Alumni Achievement Award in 2003.

After graduation, he gained broad experience in advertising, marketing, and brand management and in 1967 was hired by Ray Kroc and Fred Turner to create a marketing department at McDonald’s. During his tenure, the chain grew from some 700 domestic stores to more than 33,000 worldwide. Paul created the marketing code to provide global brand direction.

Since his retirement, Paul has remained involved with Ronald McDonald House Charities. He is deeply committed to their mission, serving as global chair of the Ronald McDonald board of directors from 1996–2006, and is a lifetime trustee. McDonald’s has been the nonprofit’s mission partner since the first house was built in Philadelphia in 1974. The organization now has local chapters in more than 63 countries, with more than 365 Ronald McDonald Houses worldwide.

And while Paul’s work has earned him recognition throughout the years, winning the American Marketing Association’s Achievement Award in 1982 and 1992 and earning a place in the American Advertising Federation Hall of Fame in 1998, it’s the relationships formed along the way that stand out most. Loyalty and a passion for his work are very important to him, and they are traits he recognized in former President O.P. Kretzmann. Paul attended classes O.P. (as he was known throughout campus by faculty and students alike) taught for seniors and was struck by his deep passion for Valparaiso University and the students. O.P.’s influence is evident in the way Paul speaks of his work. “It became very clear to me that the key to success is to honestly love what you do and communicate that passion to others. I learned that from O.P. Kretzmann.”

While Paul’s accomplishments are significant, he says luck and being in the right place at the right time are part of success. “It’s the quality of the people I had the chance to work with who helped make it all happen.”

Paul knows teamwork is crucial to achieving success, and that’s part of why he and Jan invested in men’s basketball recruiting efforts. “That’s where it all begins,” he says. A fitting observation from a man whose career, marriage, and commitment to philanthropy all began here at Valparaiso University.

The competition is tough out there, and getting the right five guys on the floor at the right time will help Valpo gain attention, entice players to come play for us, and attract people to attend games. It’s a tremendous opportunity to showcase the University.