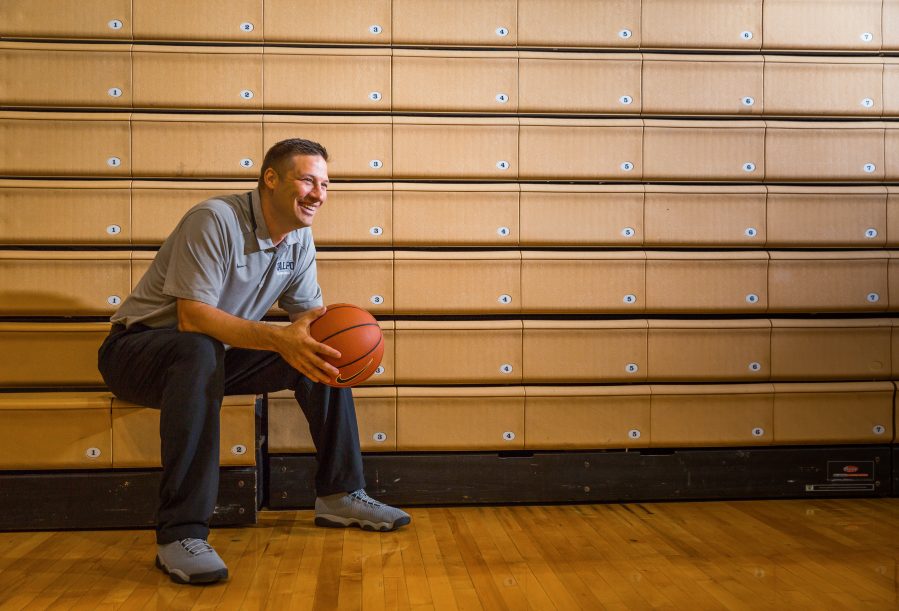 Men’s basketball associate head coach Luke Gore ’06 M.S. has always thought of Valpo as a special place. But after 15 years on the coaching staff, it’s the middle of his 10th season that stands out in his mind as illustrating exactly why Valpo is so special.

Coach Gore and his wife, Cheryl ’06 M.S., were about to welcome their first child, Bartholomew, via adoption in early January 2012 — coinciding with the start of league play for the basketball program. But in the mind of then-head coach Bryce Drew ’98, there was no question where Coach Gore’s priority should lie.

“It was an amazing situation when Bartholomew was born,” Coach Gore says. “It wasn’t a matter of ‘when can you get back to work?,’ but rather ‘take the time to take care of your son, take care of your wife.’ I had to tell Bryce when I was coming back, and he kept insisting that I take care of my family first and foremost.”

Working with four different head coaches, Coach Gore has been part of a multitude of successes for the men’s basketball program — seven regular season conference titles, 10 postseason appearances, three trips to the NCAA Tournament, and a spot in the 2016 NIT championship game at Madison Square Garden.

“Luke has been a constant thread in our men’s basketball program throughout the last 15 years,” says Mark LaBarbera, director of athletics. “He understands the culture and how it’s been built over time, and he has been a valuable contributor to the program. To have four head coaches come through and understand the qualities and strengths Luke brings to the staff speaks to how much of an asset he has been to the program and to Valpo Athletics.”

It’s been the commitment to the family atmosphere within the program, as well as the commitment to developing players into well-rounded men, that makes the Valpo men’s basketball program and Coach Gore an ideal fit. It’s those commitments that inspire him as he enters his 16th season on staff and second as associate head coach under head coach Matt Lottich.

Coach Gore first became aware of Valpo through a pair of personal connections — his mother, Carolyn Falkenroth, graduated from Valpo in 1966, while one of his college basketball coaches, Cal Luther, was a 1951 alumnus. So he already knew of the University when he received an opportunity to work with Rin Seibert ’76 in the recreational sports department. Coach Gore decided to seek out first-year head coach Scott Drew ’94 MALS to see if he could help out the Crusader basketball program.

“I quickly learned just how good the program was,” Coach Gore says. “I’d been around a lot of players from my playing days in college, and these guys were bigger, better, and more talented than anybody I’d played with or against.”
It wasn’t just the program’s level of on-court success that caught Coach Gore’s attention. The way the coaches handled themselves off the court and treated the players made an even bigger impact.

“I learned early on from the others on the staff — watching the way Scott treated his staff and valued family; talking to former head coach Homer Drew and hearing how important family was to him; being around coaches who were trying to be positive influences on the players,” Coach Gore says.

For Coach Gore, the family atmosphere is the rock of the men’s basketball program. Whether it’s welcoming players into his home, or letting Bart or his sister, Christine, run around the basketball wing and find their favorite players, the notion of the Valpo family is one that resonates strongly.

“I think family can be a cliché in college sports — every program can say ‘we’re a family,’ but that’s just words,” Coach Gore says. “I don’t want to be a guy with words, I want to be a guy with actions. So when I tell a player he can come to my house anytime he wants to, I’m always available to him.

“We’ve had some amazing, quality men who’ve been through our program as coaches. People I’ve been fortunate to work with and work beside and who have consistently shown that Valpo men’s basketball is a family through their actions.”

Part of that family atmosphere to Coach Gore is serving as a mentor to his players — being a role model for players through his actions and helping to develop young men who are prepared for life after college.

“It’s easy to focus on his on-court contributions, but Luke’s most important contribution to our program has been his relationships and mentorships of the players who have gone through our program,” Coach Lottich says. “Luke really understands what our University is all about, and he embraces the family component of our program to the utmost. He genuinely loves our players and invests in their development both on and off the court.”

Entering his third year as a student-athlete at Valpo, Derrik Smits ’19 has felt the influence that Coach Gore tries to impart on a daily basis to the players on the team.

“Coach Gore almost teaches me more off the court than he does on the court,” Derrik says. “He is a great role model on how to be a good, selfless person. He has taught me during the last couple years how to be a better person and how to react to adversity in a positive way.”

Coach Gore’s mentorship of young basketball players extends beyond the Schrage Basketball Wing in the ARC. He’s served as head coach of an Athletes in Action team, which toured the Czech Republic and Poland — a trip that Derrik and teammate Micah Bradford ’20 attended as well.

“I’m as competitive as the next guy, but on these trips, the winning or losing isn’t the most important thing you do — the most important thing is touching these players’ lives,” Coach Gore says. “These guys have some powerful, life-changing experiences on these trips. We try to encourage them to recognize how they can take these experiences and go on to not only compete in a way that honors Jesus and everyone around them, but also that affects their lives in a positive manner.”

“It was awesome to see Coach Gore in a different setting,” Derrik says. “He was in charge and taught us how to do right by everyone. He showed that he can be a great leader and a great person to follow through the ups and downs, in basketball and in life.” 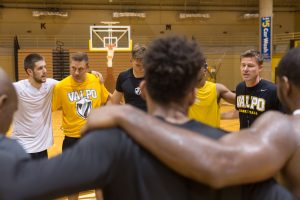 While maintaining the family culture of the program, Coach Gore has also experienced great success on the court. During his tenure working directly with the post players on skill development, the Crusaders won 303 games, 12 post players earned All-Conference honors, and 13 posts went on to play professional basketball.
“Luke has been such an integral part of the success of the Valpo men’s basketball program in his time here,” Coach Lottich says. “His knowledge of the program, his ability to develop players, and his ability to recruit have been vital components of the program’s success.

“Valpo basketball would not be where it is today without Luke’s presence.”
Ask Coach Gore about his time at Valpo, and it leads to a look forward rather than a look back at the banners and the rings commemorating the success. While victories on the court may ebb and flow, it all comes back to creating people who are ready to take on the world after their time at Valpo is through.