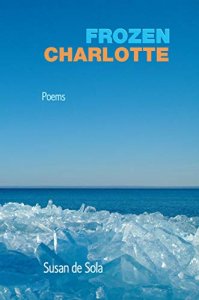 An end-note in Susan de Sola’s new, full-length collection, Frozen Charlotte, explains that the title phrase refers to “a widely popular nineteenth-century doll depicting a frozen, naked corpse” (p. 103). It’s hard for a contemporary reader to imagine giving such a doll to a child. What parent today would want to give their child a “vanitas,” a stark reminder of the child’s own mortality?

Parenting may have been a little different in the Victorian Era, but a Frozen Charlotte is certainly an apt metaphor for the icy finale that awaits us all. While this book is full of references to death, sometimes overt, sometimes subtle, it is far from morbid. Instead, the awareness of death that infuses Frozen Charlotte serves as a reminder to appreciate the people, especially family, who make life worth living, as “pearls form rounds from grit,” a phrase from the first poem in the collection (“Bowl of Sea Glass” p. 5). De Sola’s writing is so skillful that it takes a couple of readings to realize this poem is a 15-line variation on a sonnet. Formal elements fill this book: received and nonce forms, blank verse, near rhymes and sight rhymes that give the book its lyricism. The plot of Alfred Hitchcock’s North by Northwest is summarized in witty couplets that focus on the impeccably tailored gray suit Cary Grant wears for most of the film: “it hurts / to see him roughed up, passed out in a cell. / He fares quite badly, but the suit wears well.” (“The Light Gray Suit: North by Northwest,” p. 13)

The second section of the book includes a menagerie where portraits of camels, crickets, cats, frogs, birds, mice, and a piglet named Kevin offer glimpses of de Sola’s wry humor and keen eye for the foibles of human society:

This bash for a piglet is really to show off

reclaimed for the gentry, and Kevin

is the perfect gentleman’s perfect accessory. (“A Party for Kevin,” p. 30)

Sadly for Philippe, adorable piglets grow up into adult pigs, and Kevin, whose birthday presents included a towel embroidered with his name and a zirconia-studded collar, ends up on a farm where he is free to act like a pig instead of a poodle. The closing poem in this section, “Mouse Time,” is a short, quiet poem about the number of heartbeats—“a countdown of time” (p. 37)—allotted to all creatures.

“Mouse Time” is a fitting segue into the central section of the book, which is a catalog of losses. The lost things range from opportunities to inanimate objects left behind, like elastic bands and a rose-gold ring, to people: a dead infant, a ten-year-old child, the millions lost to death camps. The poignancy of these poems is highlighted in this 75th anniversary of the liberation of Auschwitz. In “Wertheim Park,” de Sola writes of an annual commemoration, where a woman in the crowd interprets the rabbi’s remarks for a deaf man:

The rabbi’s prayers began: to remember them,

and all the numberless, nameless dead,

and all the known, too many to name,

so he sang a litany of camps instead.

Interlaced in the Hebrew melody:

De Sola explores her Jewish heritage in poems throughout this book, acknowledging “the trick of a forefather’s emigration” (“Hollandsche Schouwburg,” p. 68) that led to her mother growing up in New York, a “shameful miracle” that spared her branch of the family. For readers whose families came to the United States seeking mere opportunity, not sanctuary, this eight-line poem takes one’s breath away. We likely still have cousins in the old country. The poet can only speculate about “cousins that I might have had.”

Family is at the forefront of the final section of the book, which contains some of the most celebratory poems in the collection. The poems here refute Frozen Charlotte’s pessimistic outlook. A toddler crawls in bed with her parents. A mother observes her growing, teenaged son. There are several poems that acknowledge the passage of time but imagine it can run backwards, à la Benjamin Button:

When the brows’ rows unruffle

And the hair sheds its gray,

When we can duck our duties,

Cary Grant makes a return appearance, too, in “Bringing Up Baby,” which begins: “Life is like that, running round a swamp / in search of a jaguar, or the crucial bone” (p.90). The poem’s playfulness echoes that of the screwball comedy classic, including a pun on the star’s last name: “…there’s nothing Auntie’s / pot of gold—the magic grant—can’t fix” (p.91).

The final poem in the book exhorts us not to ignore life’s daily pleasures, because they are all we have in the end. The legendary Charlotte, it is said, threw them all away because of vanity, freezing to death on her way to a ball because she wanted to show off her gown. Don’t be like Charlotte, de Sola argues; be like the humble fruit fly: ‘The fruit is fine, the day is long. / Let us feed, buzz, rejoice” (p. 100).

Patricia Valdata is a poet and novelist. Her fiction publications include two novels, Crosswind and The Other Sister, which won a gold medal from the Árpád Academy in 2008. She also has two poetry books, Where No Man Can Touch (winner of the 2015 Donald Justice Poetry Prize) and Inherent Vice, and the chapbook Looking for Bivalve. Valdata is a past recipient of the Mid-Atlantic Arts Foundation Fellowship to the Virginia Center for the Creative Arts.