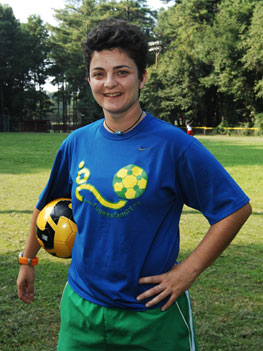 Luma Mufleh is the inspirational coach of a soccer team called the Fugees—short for refugees. The players on this team come from 18 war-torn countries, including Afghanistan, Iraq, Bosnia, Congo, Somalia and Sudan. Most of them have endured unimaginable hardship: one young boy was forced by soldiers to shoot his own best friend, another watched his father shot to death, and all have been robbed of their childhood.

An immigrant from Jordan, Mufleh moved to Atlanta a year and a half after graduating from Smith College. While driving through the town of Clarkston, Georgia, she noticed a group of boys playing soccer in the street. They played without some of the most basic equipment—but they played for the sheer enjoyment of the game—something that reminded her of home. In the summer of 2004, she made fliers announcing tryouts for a soccer team. The flyers were in Arabic, English, French and Vietnamese and were distributed around apartment complexes where many refugees lived.

Mufleh quickly realized that the needs of this particular team were going to be unique. In addition to the challenges faced by every preteen and teenager, the players on this team were dealing with post-traumatic stress issues, language barriers, cultural disconnects and devastating poverty as their economic reality.

By making a commitment to these young children, Mufleh made a commitment to their families as well. The team provides strict discipline (all players must sign a code of conduct contract), tutoring for the players, and a sense of community for them and their families. Weaving together a community based on shared experiences, both on and off the field, Mufleh helps the players develop support networks for themselves and their entire families.

Recognizing that as one single volunteer she couldn’t begin to address the complex needs of the players and their families, in the fall of 2006, Mufleh helped found the Fugees Family With a goal to help refugee families transition to life in the U.S., the organization provides tutoring, assistance with housing, and health and educational programming. Mufleh also founded Fresh Start, a cleaning service that employs immigrants or refugees, many of whom are parents of the players, guarantees forty hours of work a week starting at $10 an hour and provides professional development: English language training and finance, computer, and cleaning skills. In the summer of 2007, Mufleh gave ownership of Fresh Start to her employees.

With an emphasis on what can be done to change the life of one child, one family at a time, Mufleh’s work is the kind of “Social Entrepreneurship” that radically transforms any community. At the podium, Mufleh movingly talks about how she became involved with the Fugees, the plight of the children she helps and what they teach her in turn.

The story of The Fugees and their coach embodies many of the ideals that are thought of as “American”: giving opportunity for selffulfillment, using one’s own ideas and talents to help the common goal and remembering that “we don’t win or lose alone—it’s always the team score in the end.”