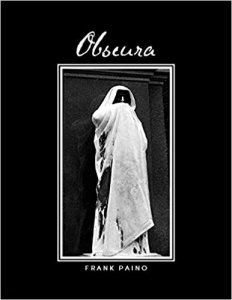 “Tell me, when should we stop / letting grief tell us its beautiful lies?” Frank Paino asks in the poem “Stasis,” about a two year old girl who died, and who had her remains preserved, “daughter of airless dark, / patron saint of desolate fathers / and unfaltering denial….” This question hovers over many of the poems in this collection; many of the poems wade mouth-deep into past tragedies, and as I was reading through and being generally astonished at how the book skips across the centuries, I thought of Robert Lowell’s History, but the way Paino offers the narrative of each tragedy, along with analysis and questions about the historical incident—each poem plumbs human nature in some way, shape, or form and the way we respond to tragedies—I was reminded of Kierkegaard’s Fear and Trembling, in which an alias of K’s tells the story of Abraham and Isaac—one version of the story, that is—followed by a “panegyric” that seeks to unpack the story. In particular, these lines, that end a poem about Laika, the first dog in orbit, spoke of a kinship between the books:  “And there’s no faith to be placed / in the weary myth of sacrifice; / no way to make right / the trust that was betrayed….”

One pleasure of this book is simply the number of fantastic stories Paino tells. From Genesis to the Apocalypse, with meditations in between on Martha, the last passenger pigeon, to a drowned church in Venezuela, to the “horse latitudes,” to a sunken steamer and its dead, to Harriet Shelley, to a “reverse Noah’s ark” in 1827 that sent a boatload of animals over the Niagara Falls, to a Victorian dinner featuring a mummy unwrapping, to a poem on Edison’s preserved last breath—the historical range of this collection is truly amazing. In an age and country that is (over)saturated with the first person lyric poem, Paino’s poems are especially remarkable. If this book was a museum, it would be one that houses curios and rarities and oddities alongside largely forgotten stories and tragedies, executions, and suicides—but since so many of the poems also explore the sacred, and the lives (and executions) of the saints, it might be a museum housed in a cathedral, say, or the other way around.

Paino is a poet with an instinct for slowing down an incident and allowing the reader to watch it unfold through a procession of images and details. In “The Left Hand of the Devil,” I lingered on the first lines of a poem about an early 19th century violinist named Niccolo Paganini: “Darkness. Fever moons on his gums wax…a woman he cannot see / makes a sound that reminds him / of honeybees drugged by smoke but still hauling / their impossible plunder of sunlight.” And in “Mercy,” a poem about a sailing ship that has hit the “horse latitudes,” and is dead in the water, he zeroes in on the actions of an unnamed protagonist, who performs a “small mercy,” that of tying “a kerchief around the sharp angles / of his favorite mare’s head, / closing her view of endlessness,” then offers these painterly details: “…a rime of dried sweat circling the moss of her / flared nostrils as she buries her muzzle / in the barley cupped in his outstretched palm….” The poem then savagely turns, and Paino slows the poem down further—slower than in real time!—to show the horse being driven overboard: “And now a slap on her croup, hard enough / to make her start, fetlocks fraying in flight / as if she means to tread sheer atmosphere, / then a black hoof brands a slick half-moon / above his heart a moment before she vanishes / in a sickle of sunlight….” She’s soon joined by fifteen more horses, sent overboard by desperate sailors, with “No munitions to spare. No strength or stomach / for bloodletting.” To slow time like this is a difficult task for any poet, but to do it in a cinematic fashion with such a richness of imagery is an achievement of an accomplished poet. “Hell’s Gate,” a poem about the Slocum, which caught fire and sank with over a thousand people on board, does this even better with the aftermath:

that timber tomb—while above their quiet forms

tresses to traceries. And the white blooms

against the liquid blue, as if a throng of revelers

had just passed through the gates of hell

casting handfuls of pale roses as they went.

These are beautiful images, married to a subtle yet audible music of internal slant rhymes and alliteration. In “Litany of the ‘The Most Beautiful Suicide,’” the anaphora “Let her” and “Let the” (“Let her awaken unafraid…let her put on her rose dress & makeup…”) is a relentless refrain that builds and builds to the moment a young woman leaps from the Empire State Building—the anaphora feels like fate, intricate but inexorable, yet the poem turns, at last, to the viewer (and reader): “Let we who did not know her / be absolved for finding beauty / in such broken truth— / for, having looked upon her, / being powerless to turn away.” This suicide, and the public’s reaction to it, was a foretaste of future celebrity suicides, and the saturation of media attention and public consumption that attended them. I find it notable that Paino asks for absolution here, on our behalf, as so many of the poems show us at our coldest and most violent. I think that’s what moves his poems past mere witness, and narrative—aside of course from the artfulness of the poems—but his vision is wide, and willing to encounter a variety of suffering, and more importantly, to reckon with it. And this isn’t limited to human suffering—Obscura has a number of poems devoted to animals as well, and their suffering—at our hands. Aside from the horrifying “reverse ark,” the doomed horses aboard the ship in “Mercy,” Laika, and poor Martha the endling, he also includes “52,” a poem devoted to a whale given that number, who apparently sings at a higher pitch than other whales, who do not respond to him—and what a sad and lovely little poem this last one is! Paino includes how this whale has entered our culture, in our dreams, and as tattoos along our backs and arms. And these turns in the final part of the poem: “Pack-mule for each grief or joy we make you bear. Monarch of misfits. Psalmist of an unknown tongue.”

There were times when I got lost in syntax that felt overcomplicated—especially when that complex syntax was coupled with abstractions. For example, “If There Is Such a Thing as Mercy,” it took some doing to get through “…if there was such a thing as mercy, / perhaps it descended in dreams drenched / in genetic memory, where the crowd’s cacophony / transmuted to the mother tongue / of your vanished dynasty whose chatter once buried / the black thunder of a dozen locomotives, / whose passing overhead could evict daylight….” A former professor of mine, Bruce Bond, once described a complex poem as a “chewy” poem—I love that! And I’m all for chewy poems, and chewy syntax, but even after repeated readings, I struggled through the passage. Contrast that with the three short punchy sentences of the ending, however: “…and the alchemist’s exquisite taxidermy / that brought you back to strange half-life, / poised on a slender branch to keep, forever, / your solitary watch. / Bird of what lies in ruins. / Bird of a billion-to-none. / Bird of a lesson we refuse to learn.” For all the intensity the poems manage to achieve, I found myself overwhelmed at times by the subject matter—I’ve been struck, lately, by the number of collections with a rather narrow tonal range. Nickole Brown, in the foreword, warns the reader that this book might have to be read in a number of sittings, and she’s right. The agonies the reader encounters take their toll quickly, and many of the poems ratchet up the emotional volume to eleven. So when a poem like the aforementioned “52” appears, or the musical—and whimsical—poem “Dog / Buddha,” a poem that looks around at a random street (even here there is an anonymous death), and is content to be fully invested in the here and now, the reader is able to take a bit of a breath and reset. “Caritas Romana” was another of these poems, an anaphora-charged story of a woman who visited her imprisoned father, who had been sentenced to death by starvation—and saved his life by breastfeeding him.

This is an extraordinary book of poems, and if the book had a tribe, it would be a tribe of heretics, doubters, and the doomed, human and animal—but also those who show mercy in spite of all the suffering. I was surprised when, in the final poem, I encountered the lines “We passed an hour or more amongst the wreckage of / so much flesh. Long enough to remind me / why I don’t have faith in any god. Long enough / to make the lovers who moved ahead of press / so close I knew their night would end sooner / than most in the comfort of their rumpled bed.” This statement moves the poet beyond his earlier evocation of grief, and provides a bridge—or more accurately, perhaps, a kind of key—to the conflation of some of the erotic and sacral language in the book. And in a book in which so many of the poems unfold inside a cathedral, from the “Drowned Church” of Potosi, Venezuela, to the Church of the Sacred Heart of Suffrage, Rome, or tell the story of this saint or that one—St. Mariana, or the headless cephalophores—it came as a surprise to find the first-person speaker in the final poem confess, of all things, his unbelief in God. I guess I expected to feel that some of the poems in the book were—I don’t know, a bit touristy because of that (not that “tourism” poems are inherently charmless). I didn’t feel that way, reading back through, however—and I think it’s because of Paino’s generosity of spirit. If he thinks it’s odd for a person to devote one’s life to God, it does not come through here. Quite the opposite—one gets the sense that Paino has set out a place for them at his dinner table, that he would, in fact, if he were a neighbor, friend, or family, laugh with them and mourn with them. One gets the sense that he’s lived alongside these folks, and that he treats their beliefs and practices with a quiet reverence, in poems that are charged with what James Wood, apparently borrowing a term from the medieval theologian Duns Scotus, called “thisness”: “any detail that draws abstraction toward itself and seems to kill that abstraction.” This is a book freighted with the “thisness” of both the now and the past, and of both this world and whatever follows after.