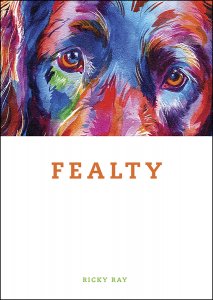 The epigraph to Ricky Ray’s stunning debut, Fealty, comes from William Stafford’s The Answers Are Inside the Mountains: Meditations on the Writing Life: “The earth says have a place, / be what that place requires.” These lines emphasize two of Ray’s major themes—the importance of the natural world and humanity’s attempts to live up to this world’s majesty. Divided into three lengthy sections, Fealty includes poems dedicated to or in conversation with many other poets, including Wendell Berry (one of the book’s dedicatees), Czeslaw Milosz, and C.D. Wright, among others. As is often the case when prominent poets are named in a younger poet’s work, these are indications of Ray’s influences. Even more, however, as the book goes on and the names accrue, they become aspirational figures as well. If Ray continues to build on this collection’s heights, he will one day find himself named among the above figures in a future debut poet’s work.

“Listening,” from the collection’s first section, combines Ray’s gifts for both prose and lineated poetry. It opens in fairy tale fashion: “A man, tired after a day’s journey, comes to a cabin in the woods and opens the door” (20). Later, “He puts his head / to the table and listens” (20). The voice of the table combines with “all he can remember of tables—of wood, trees, seeds and growth, of splinters, termites, rotting and soil. Eventually his mind takes him to the edge of the field where he grows quiet and humble, where his inner voice no longer speaks for the table, and feeling takes over” (20). This move from conscious thought to feeling or sensation is a significant one in this collection. Ray’s speakers seek to make such a transition, oftentimes falling short, but this man is successful as he ultimately “listens, not to the table this time, but to the living day—the things he can hear and the things he can’t” (21). In barely more than a page, this man is able to see both the forest and the trees, so to speak; he can zoom in to appreciate all that went into the making of the table and pull back to see how this tree is part of “the living day,” even part of the mysteries beyond his perception.

Readers might imagine the man from “Listening” growing into the sage of “The Exchange,” who tells the speaker and his wife, “there’s only one piece of advice / I can give you: grow things” (lines 7-8). As soon as he’s said this, he thinks of another: “when you find your land, / learn it like someone you both have married” (lines 11-12). Here, the earlier poem’s interest in things heard and unheard leads to the search for deeper knowledge, of a felt sense more than an encyclopedic understanding. This is not an easy path, however, as

on the finger; the memory of what happened here,

and where here is, and how here lives,

dwindles in the downturned lamps of people

who take to sleeping in the daytime,

Unlike many poets, Ray does not romanticize nature. He shows the cost of dedicating one’s life to “the land.” It can cause stress to one’s marriage, as it seems to for the speaker and his wife; the memories it holds can haunt and bewilder; and the pain it brings can almost become too much before “that awful, eerie quiet” sets in.

In “Paradise,” another prose poem, humanity ruins perfection, as in the story of the Garden of Eden, for just “because you put people in idyllic situations doesn’t mean they behave ideally” (57). One young boy “needs a good kick in the balls,” while the speaker thinks, “Nice, not nice, it’s a matter of moods” (57). Such moods seem as variable as the wind that carries the poem’s pigeons and hawks. Even though the speaker suspects that he does not achieve the greater significance he seeks, he stills forges a connection with others: “I look at you and see myself. You look at me and see yourself. The heart races. Vibration rises. The air becomes palpable between us. We both sense it and then we are, we’re touching. We always were. We need only remember how” (58). This deep intersubjectivity is akin to that between individuals and nature throughout the book. One can imagine the man in “Listening” experiencing a similar connection with the world around him through his ability to commune with the wooden table in that “cabin in the woods” (20).

While “I Saw Myself in the Black Car” is dedicated to C.D. Wright, one can’t help but think of Emily Dickinson as well, for “my friend old black” (line 12) is most assuredly death. Just as the speaker says “hello” to this friend, he explains,

One truth says: goodbye to the red river of blood

is all there is to dying. Another truth calls each end

a homecoming, blood’s seep into the earth, where blood

is washed of salt and deed, then blood runs strong and clear

Ray’s speakers typically call on their senses to help them navigate the wonders around them, but neither sense nor a dependence on the natural world will be of help here. The speaker seeks “truth” but is foiled by the mysteries surrounding death. How can death be both a “goodbye” and a “homecoming”? Sadly, by the time this speaker can provide an answer, or a third “truth” that bridges the two, he will be unable to share it with others. Therefore, as the speaker of “Death, a Wife, and a Life of Broken Rules,” avers, there is nothing left to do but to make peace with death, our “lifelong confidante” (line 3).

Many of the book’s themes coalesce in section three, particularly in a poem such as “Chopping Wood.” The speaker is “out in the rain, / so much rain in that land of green hills, / evergreens and infections of the lung” (lines 1-3). These “infections” foreshadow the danger still to come, for no matter how careful the speaker is in splitting wood, “Once I missed the log and the block entirely, / and the blade glanced off my shin” (lines 56-7). Miraculously, it “made no damage, / no cut, not even a bruise, / and I thought of how easily / the bone would have splintered” (lines 58-61). Such reflection leads to a stronger emotion than the surprise at his miraculous escape from harm: “I felt pain at the thought of being a tree / subject to the woodsman’s expertise” (lines 62-3). The speaker considers all of the roles this tree could fulfill—shade, a cradle for birds’ nests, “the resting spots for migrants, / playgrounds for squirrels, haunts for owls, / whose screeches scorched us in our beds” (lines 68-70). But death lingers on the periphery as well: “I thought of the grave / I dug on that property” (lines 72-3). This one was not for a person, however, but for llama, whose mother “low[ed] / as her child’s body / decomposed under the tarp” (lines 79-82). Like the “red river of blood” and salt that will mix with other elements in “I Saw Myself in the Black Car,” the speaker here references the decomposition of matter, the part of the lifecycle that has the potential to nourish the earth even as the living mourn their losses. In this way, Ray emphasizes the broad view of the natural world. Yes, it is a dark day when our “lifelong confidante” pulls up in his black car, but that end is also a beginning. Perhaps this poem provides that third truth that the speaker of the earlier poem could not identify.

As far as beginnings go, this collection is certainly an auspicious one. Ray is adept at a range of styles and forms—lyric, narrative, persona, and prose poems, alike—and has found subject matter that can sustain him for the length of his career, if he so chooses. As the speaker of the opening poem, “What These Senses Can Do,” explains, “I, for one, / am still learning / what these senses can do” (lines 16-18).

Matthew Duffus is the author of a novel, Swapping Purples for Yellows, and the forthcoming Dunbar’s Folly and Other Stories. His reviews have also appeared in a variety of outlets, including Rain Taxi, The Cresset, and The Quarterly Conversation.