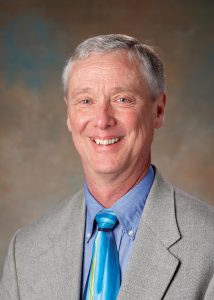 Robert Clausen graduated from Valparaiso University in 1969 in the premedical program with a B.S. in Biology and Chemistry. Following completion of his medical education at Kasturba Medical College in Manipal, South India, he pursued further study in Internal Medicine and Clinical Immunology at Henry Ford Hospital in Detroit. After moving to South Bend, Indiana, he founded the Allergy & Clinical Immunology Department at the South Bend Clinic. For more than thirty years, he provided much of the primary and specialty outpatient care for people with immune dysregulation, including individuals infected and affected with HIV disease in North Central Indiana. In addition to medical practice, he was a member of the faculty at the University of Notre Dame in the Department of Biological Sciences and at the Indiana University School of Medicine – South Bend.

After retirement from clinical practice, Dr. Clausen focused his attention in the non-profit realm. This includes such organizations as the Lutheran Volunteer Corps, AIDS Ministries/AIDS Assist of North Indiana, and the local NPR station. He has also previously served on the President’s Advisory Council of Valparaiso University. A vocal and instrumental musician, he serves his community of faith at Christ the King Lutheran Church in a number of capacities. He is happiest with his daughter in Cleveland, his family of origin in Germany, and his adopted home in India.