Various people who have had and still have an active part to play in the Overseas Study Centers of Valparaiso University were asked to provide a history of the development of these centers, a statement of their operating philosophy, and a description of the day by day working of the centers. With this information The Cresset hopes to bring its readers information of interest about one important facet of the University’s work. Perhaps the information will be of value also to other institutions and to students considering their educational plans. (Kenneth F. Korby, January 1973 issue of the Cresset).

Dr. Friedrich reports that after the initial shock at the assignment, he attempted to make contact with his friend. Prof. James Sutherland of the University of London, Prof. Clever, Director of the Indiana University Study Center in Hamburg, Germany, and Dr. Norman Nagel, then preceptor of Westfield House, Cambridge, England.

Cambridge was a natural first choice for a study center in England, both because of the city and the university, and because of the contact with Dr. Nagel. Although Westfield House, the house of studies for Lutheran theological students at Cambridge, was too small to house the Valparaiso University students, Dr. Nagel, the Preceptor, assured Valparaiso of his support for the new center. Fortunately, the Evangelical Lutheran Church of England owned property adjacent to Westfield House. Although the house on the property was in bad repair (“dilapidated” was Dr. Friedrich’s word), it was arranged that the Valparaiso students would be permitted the use of the educational facilities of Westfield House, some students were to be housed there, and the old house was to be renovated, furnished, and rented to Valparaiso University for student quarters. Dr. Nagel was to serve as chaplain for the study center.

Together with a memorandum from Prof. Clever, Dr. Friedrich received the minutes of a conference of the directors of various American study centers in Europe. The American Ambassador to Germany called the meeting to bring together a report on what American universities were doing in Europe. In addition to this material, Dr. Friedrich had received information on a research institute in a small town on Lake Constance. Armed with this information, he set off for southern Germany, only to discover that the research institute would not provide adequate resources for classroom instruction, library, and student living quarters for the Valparaiso students.

The minutes of the conference called by the American Ambassador contained comments by a resource person for the conference, Frau Professor Dr. Annemarie Christiansen. She was well versed in both German and American education; she was chairman of the Department of German of the Paedagogische Hochshule (a College of Education) in Reutlingen, Germany, and she had served as Visiting Professor at the University of Kansas.

Through contact with Dr. Christiansen, Dr. Friedrich was introduced to the Rektor of the Paedagogische Hochschule, Dr. Otto Duerr, and presented Valparaiso University’s plan to him. Valparaiso desired to rent a classroom and an office for the director; permission was also requested for the use of the library reading room and the gymnasium. The Rektor was favorable to the plan but noted that permission would have to be secured from both the P-H faculty and the Kultusministerium (Ministry of Cultural Affairs) of Baden-Wuerttemberg in Stuttgart.

The Minster of Cultural Affairs received the plan with the suggestion that the school at Ludwigsburg might be preferable to the school in Reutlingen. After investigation, however, Dr. Friedrich decided in favor of Reutlingen. Approval was granted by the Ministry of Cultural Affairs and it remained only to receive the approval by the Reutlingen Faculty and the Committee on International Studies of Valparaiso University.

Approval was granted by the P-H faculty at Reutlingen, with one change: Valparaiso University and students were to be guests; no charge was to be made. Valparaiso University approved the arrangements and Dr. Donald Mundinger, then Dean of the College of Arts and Sciences, was sent to Cambridge to carry out the details of the plans. Faculty were secured; housing arrangements were completed, which included the students in Germany living for a time in a village Gasthaus (before moving into German dormitories in April 1969); and by the spring of 1968, the centers were operating with their first groups of students.

Valparaiso University’s overseas study centers at Cambridge and Reutlingen are beginning the eleventh semester of operation this month. Twenty-two groups, totaling 442 students, will have participated by the end of this academic year.

The purpose of the overseas centers is to provide an inter-cultural experience to interested and qualified students within the framework of their regular four years of study at minimal cost.

Since courses in the liberal arts are provided at the centers, students from twenty-seven major areas of study have been able to participate. The five highest areas have been English, with 59 students (13%), History, 47, Political Science, 45, Social Work, 24, and Elementary Education, 22 (5%). Areas producing between eleven and sixteen students are: Business Administration, 16 (3.6%), Psychology, 16, Mathematics, 15, Geography, 14, Sociology, 14, Theology, 12, and Chemistry 11 (2.5%). In descending order, yielding from ten to one student each, the remainder are: Humanities, Art, Biology, Home Economics, German, Philosophy, French, Economics, Engineering, Spanish, Music, Speech and Drama, Latin, Physics, and Physical Education.

The additional charges that the university assesses are the transportation fare, ranging from $200 to $235, an administrative fee of $5, and a group study trip fee of $30 at Cambridge and $90 at Reutlingen. The extra charge may thus range between $235 and $325. Other charges (tuition, housing, and general fees) remain the same. Regular scholarship grants are applicable toward payment. Food expenses (students prepare or buy their own meals) are comparable to or lower than on-campus costs. Of course, students take advantage of the ample opportunities for independent travel and spend, in addition, between $300 and $700 for that purpose, depending on their own financial resources.

In the past five and a half years, about 900 students have applied for acceptance into the programs. Each student has been interviewed by the on-campus Director of International Studies. The purpose of the interview is to gain a first-hand impression of the applicant and, in the course of conversation, obtain additional information about him beyond what appears in his written application. He is asked about his involvement in extra-curricular activities, about the nature of his summer jobs, what sort of sports he engages in, what kind of independent reading he does, whether he has any skills or active listening interests in music, whether he has any knowledge of art or art history, and what, if any, hobby he might have. The resulting information yields somewhat of a picture of the applicant’s versatility, flexibility, open-mindedness, and capacity to adapt to new situations.

Selection of the applicants is made by a committee of three faculty members, with the Director serving in an ex officio capacity. In selecting students, the Committee tends to prefer students of Junior standing, and other factors being equal—those of higher academic performance. Thus for both Centers, 45 per cent of the participants have been Juniors, 29 per cent Seniors, and 26 per cent Sophomores. At Cambridge the percentage of Sophomores has been lower (20%), at Reutlingen higher (32%). Academically the students’ standing has been at a “B” average, but with the range varying from “C” to “A.” The lower performance level is more acceptable in the case of Senior applicants than in that of Sophomores or Juniors.

Housing facilities have determined the balance of the sexes: ten of each sex at Reutlingen, ten men and 11 women at Cambridge. Thus of the 442 students participating, there have been only ten more women than men.

Orientation of each new group of overseas center students takes place on four Sunday afternoons and evenings preceding departure. Resource personnel for these sessions are former resident Directors of the centers, students who have had the experience abroad, and the on-campus Director. A mass of information is conveyed (much of which alas is forgotten; abroad each must learn it anew). Sessions with former center Directors are devoted particularly to inculcate the attitude of receptivity to new and different ideas and styles of living, with warnings against the offense of “the ugly American” while abroad.

While students as individuals and the student body at large have been greatly enriched in openness of vision and maturity of judgment by the experience of about eighty students abroad each year, the University faculty has also been the gainer. Eight faculty members from six disciplines have served as resident Directors and part-time instructors abroad. At Cambridge these have been Professors Donald C. Mundinger, political science, Ferencz Kallay, geography, Kenneth H. Klein, philosophy, and William F. Eifrig, music. Professor Walter E. Bauer has represented history at Reutlingen, while the other three have come from the field of theology: Professors Kenneth F. Korby, Theodore R. Jungkuntz, and James W. Albers. 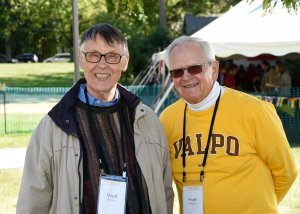 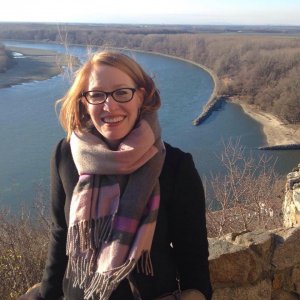 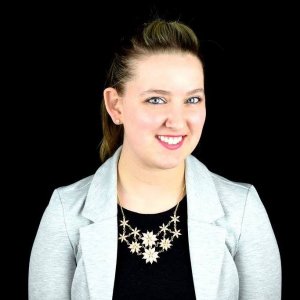