Mighty Be Our Powers 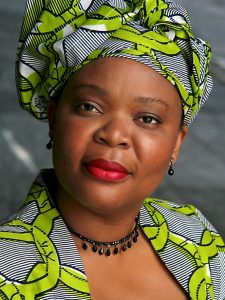 Leymah Roberta Gbowee was awarded the Nobel Peace Prize in 2011 for her work in leading a Christian and Muslim women’s peace movement that brought an end to the Second Liberian Civil War in 2003. She is founder and president of the Gbowee Peace Foundation Africa based in Liberia, which provides educational and leadership opportunities to girls, women and youth in West Africa. Her book Mighty Be Our Powers (2013) describes how her Christian faith motivated her to continue to fight injustice, and her earlier work is the subject of the Tribeca Film Festival 2008 Best Documentary, Pray the Devil Back to Hell.
Gbowee experienced the power of prayer after leading a reconciliation effort to eventually end her country’s civil war. In 1993, a dream led the peace activist to call a gathering of women that eventually formed the Christian Women’s Peace Initiative. The women prayed and fasted for the end of violence until the country reached a ceasefire. Gbowee is the mother of six who divides her time between different countries as she promotes peace. She attends an independent Evangelical church in Ghana and a Lutheran church in Liberia.
Co-sponsored by the Valparaiso University Institute for Leadership and Service and the Office of the Assistant Provost for Inclusion.