Rust can be a common irritant for drivers and homeowners, especially after a harsh Midwestern winter. A group of Valpo researchers, however, think corroded iron can help reduce pollutants that are difficult to remove.

Civil engineering professor Peter Weiss, Ph.D., is leading a team examining ways to make water running through the rain gardens in the city as pure as possible. The project, a partnership with the city of Valparaiso, is funded by the Indiana Department of Natural Resources’ Lake Michigan Coastal Program. 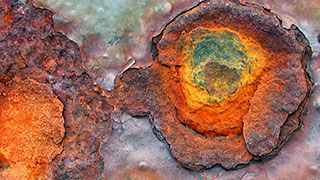 Rain gardens reduce runoff and clean water as it passes through on its way to water treatment facilities, but dissolved phosphorus – a byproduct of decaying plant and animal matter in soil – cannot be filtered from it.

The city constructed two test gardens at Central Elementary School last fall and one of them includes 5 percent iron shavings in the sand layer above the drain tile. Researchers douse each with city tap water, which includes phosphorus, and monitor the element’s level after the water passes through.

“When iron rusts, it becomes positively charged,” Professor Weiss says. “Phosphorus has a negative charge and is absorbed by the rusted iron.”

With help from fourth-graders at Central, Valpo researchers hope to continue the project through June 2016.

“Things can change over time,” Professor Weiss says. “We would like to keep testing to keep up with those changes.”