The Trip of a Lifetime

In the spring of her sophomore year, Katelyn Stermer boarded a plane bound for Central America. She knew that she wanted to become a physician. But her professor, Robert Clark, Ph.D., encouraged her to consider working in underserved clinics in Nicaragua and Costa Rica.

“I gained great clinical experience,” she says “and I learned what it means to practice medicine. You’re not just a doctor but also an emotional guide. If you tell someone, ‘You have cancer,’ there’s a whole psycho-social component beyond conveying the factual diagnosis.”

“I saw the impact of HIV/AIDS. That’s where it really turned around for me,” she says. “I felt there was a deeper meaning to the work of medicine, but I couldn’t define it. I realized it’s important to take care of a person as a whole being. A person’s body may be ailing, but the patient has social, spiritual, and emotional needs. I may not be able to treat all of those needs, but I have to recognize they exist.”

“I realized I was really invested in the delivery of health services, which is what I didn’t see M.D.s being taught,” she says. “A public-health degree can help me understand the outside factors beyond a person’s body mechanics. I want to be a better physician and have that base knowledge.”

Katelyn says she found support from her chemistry professors, who identified public health as a natural synthesis of her interests. Her advisor, Steven Engerer, Ph.D., assisted her in choosing appropriate classes for her final semesters at Valpo, wrote letters of recommendation, and helped convince her family that this was a reputable path to take.

That well-rounded person was also an excellent candidate for graduate school. Katelyn was accepted into all five master’s of public health programs to which she applied, including two Top-10 programs. She accepted a spot in the Master’s of Public Health – Epidemiology program at University of Illinois-Chicago and plans to enroll in medical school courses during her second year. 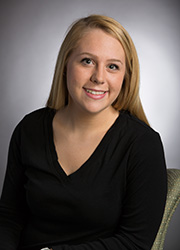