The freedom to explore new ideas changes the world.

The term “liberal arts” has its roots in classical antiquity. In Latin, “liberal” means “pertaining to or appropriate to a free person,” and in the classical world, the liberal arts encompassed those skills that were considered essential to citizenship — skills that developed the ability to think and communicate clearly, whatever the problem at hand. 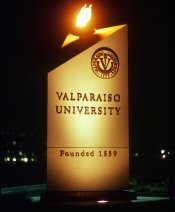 Although the specific content of study in the liberal arts may change over time, its essential purpose remains constant: it develops the ability to think critically, communicate clearly, and solve complex problems, and it encourages the lifelong pursuit of truth.

Centuries later, the ideal of the liberal arts was rejuvenated and championed by Renaissance humanists; their thought had a profound influence on Martin Luther, who considered education in the liberal arts essential to an understanding of theology. When Lutherans migrated to the Western hemisphere, they brought a commitment to liberal-arts education with them, and Valparaiso University is a bearer of that tradition.

At Valpo, the definition of liberal arts has expanded far beyond the boundaries of classical education, embracing traditions of learning from around the world and many new fields of study. Nevertheless, it remains focused on the value of the human spirit and intellect. Students in the College of Arts and Sciences experience the freedom of the liberal arts in the variety and flexibility of plans of study available, the opportunities to apply their academic skills to meaningful problems, and finally in the intellectual independence they develop at Valpo.

The Drive to Discover

The tradition of education in the liberal arts continues to thrive because it is never static. An institution that values the freedom to pursue truth constantly renews itself by integrating the new knowledge — and the new questions — generated by that pursuit. For Valpo’s College of Arts and Sciences, this means embracing change and adaptation.

The College of Arts and Sciences prizes innovation — in topics of study, in research techniques and tools, and in methods of teaching and learning. The A&S faculty never stops looking for new ways to approach their subjects and new ways to engage students. The one thing that doesn’t change is a deep commitment to helping students reach their full potential.